When atoms assembled in a more complex structure (molecule, crystal, etc.) are slightly displaced from their equilibrium position, they are subjected to a restoring spring-like force. In first approximation, for small displacements, the restoring potential is harmonic (proportional to the square of the displacement). Vibrational modes of molecules and crystals can therefore be described as harmonic oscillators.

The quantum theory of the harmonic oscillator is obtained by replacing the position and momentum canonical variables with non-commuting operators. This results in the following properties, which have no classical analog:

An oscillator always echanges energy with an environment at finite temperature. At equilibrium, the oscillator state is a classical mixture of energy eigenstates, with a mean number of excitations N roughly equal to the ratio of thermal energy to phonon energy. 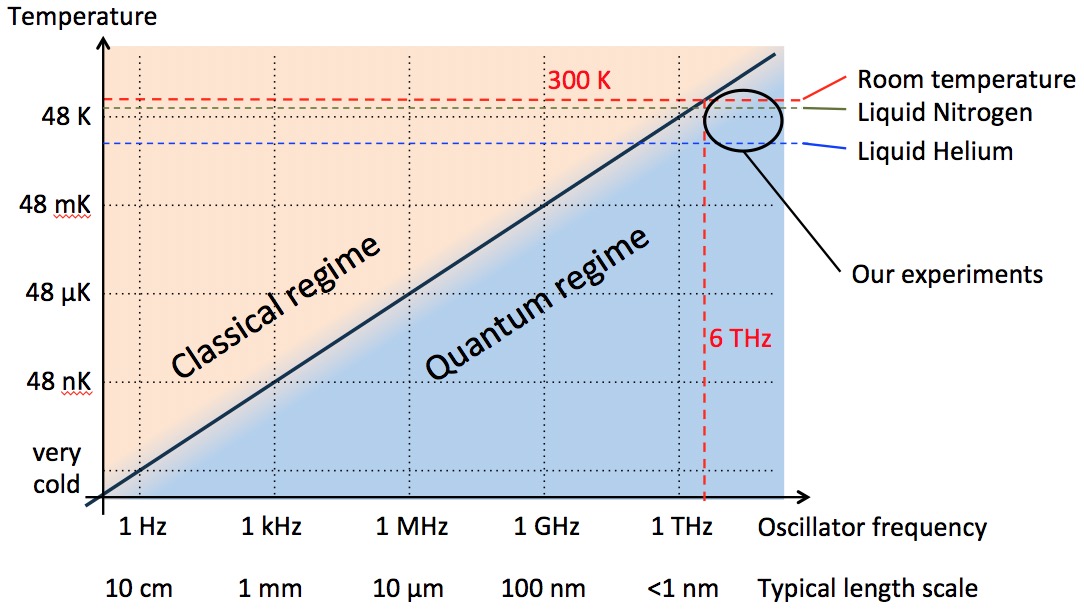 Because the frequency of Raman-active vibrations in crystals and molecules is in the 1-100 THz range, the corresponding energy is larger than the ambient thermal energy, leading to quantum phenomena observable at room temperature.

In the plot above, the “quantum regime” corresponds to a mean number of thermal excitations smaller than one. Being in this regime is not sufficient to observe non-classical effects. Indeed, most of the possible ways to excite a mechanical oscillator will result in either a thermal state, or a coherent state, both of which have classical descriptions.

Our approach to create a non-classical vibrational state, starting from a “cold” oscillator, is to use projective measurement. With a focused laser pulse, we will excite, with very low probability, the Raman-active vibrational modes of a molecule (or other nanostructure).

In this inelastic scattering process (Stokes scattering), a pair of quantum-correlated photon and phonon are spontaneously created. Performing a “strong” measurement on the photon (using a single photon detector) projects the state of the phonon in an energy eigenstate (Fock state n=1). Which vibrational mode is projected in a Fock state depends on the spectral window used for single photon detection. Indeed, the information concerning the frequency of the excited phonon mode is imprinted onto the wavelength of the scattered photon, because of energy conservation. 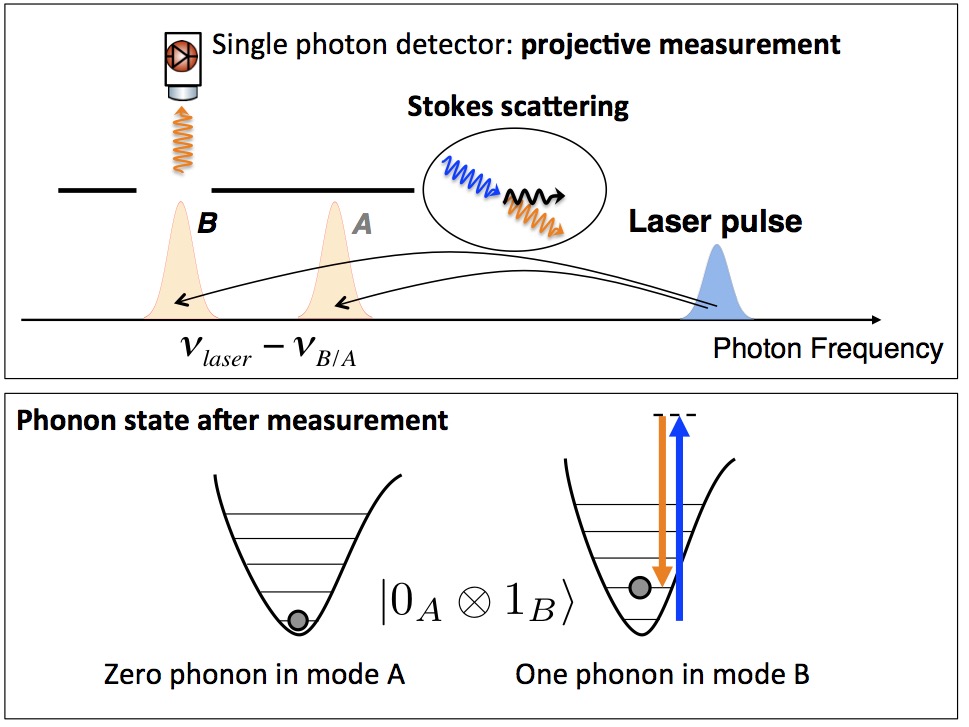 The scheme can be extended to create more exotic states, notably entangled state. For example, consider two Raman-active vibrational modes with nearby frequencies. We can broaden the spectral window of detection such that we lose (or “erase”) the information concerning which particular mode was excited. Then, the oscillator state is projected onto an entangled state, with a single phonon shared between two vibrational modes. Entangled states are often considered to hold the essence of quantum mechanics, and are essential resources in quantum information processing.