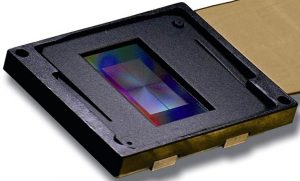 Description: Lenses form core elements of camera systems: their goal is to focus light from the outside world onto an image sensor to faithfully capture a scene of interest.

The focusing effect of a lens depends on its surface profile. Due to manufacturing constraints, it is cost-prohibitive to polish surfaces to non-spherical shapes. The consequence is that spherical lenses introduce aberration artefacts on the image plane. Camera manufacturers mitigate these effects by replacing single-lens systems with a carefully-crafted complex-lens cascade, or via software post-processing (if possible).

A spatial light modulator (SLM) is a planar optical instrument that locally modifies the light field to steer it in non-trivial ways not possible with a lens. Due to their fast response times, SLMs are often used in projector systems and holographic displays. In effect, an SLM can be regarded as a programmable lens array. While their deployment in consumer cameras remains unlikely, their use in high-precision optical instruments is already commonplace.

The goal of this project is to assess (via simulation) the image fidelity of a camera system when the spherical lens is replaced with an SLM.

Prerequisites: experience with numerical computing, signal processing and optimization; some knowledge of optics is a plus.