Maartje Bastings, PhD (1984), studied Biomedical Engineering at the Eindhoven University of Technology (2003-2008). Her master’s program included two international research internships in the USA. She worked on the self-assembly of nanocylinders from triblock copolymers in the group of Craig J. Hawker at the Materials Research Laboratory of the University of California, Santa Barbara and on the development of soft biomaterials via clickable artificial extracellular matrix proteins in the group of Dave A. Tirrell at the California Institute of Technology, Pasadena. Maartje’s educational program was completed cum laude with a research project on macrocyclization of enzyme based supramolecular polymers in the group of E.W. Meijer at the Eindhoven University of Technology. Maartje combined her undergraduate studies in Biomedical Engineering with a professional education in classical flute on the Fontys Conservatory, Tilburg (BMus, 2007). 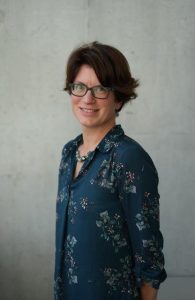 In 2008 she was awarded a Toptalent Fellowship of the Netherlands Organization for Scientific Research (NWO) for her research proposal entitled: “From phage display to dendrimer display: a modular approach towards directed targeting”. She performed her PhD research in the group of prof.dr. E.W. (Bert) Meijer, working on the understanding of multivalent binding mechanisms for directed targeting and the development of dynamic biomaterials for tissue engineering and successfully defended her thesis titled “Dynamic Reciprocity in Bio-Inspired Supramolecular Materials” in September 2012. Her thesis was awarded the University Academic Award (2013) for best university-wide PhD thesis.

From November 2012 – December 2016, Maartje worked as a postdoctoral fellow at the Wyss Institute / Harvard University in Boston, USA, broadening her supramolecular self-assembly knowledge by crossing borders to the DNA and cell biology world. Using DNA as polymer biomaterial she will explore the use of DNA nanostructures as immuno activating compounds and their potential as delivery nano-capsules. Her postdoc was funded by two research grants, the Dutch NWO Rubicon fellowship and the Human Frontier Science Program cross-disciplinary fellowship.

Since January 2017, she is  appointed at EPFL as tenure track assistant professor, heading the Programmable Biomaterials Laboratory (PBL), which is affiliated with both the Institute of Materials and the Interfaculty Bioengineering Institute. PBL bridges the two institutes with our focus on the development and characterization of new materials using bio-molecules and bioengineering techniques. Her quest is to use DNA as a precision engineering tool to unravel the role of spatial organization in multivalent interactions.