Skip to content
Professor of Mathematics
Director of MCSS 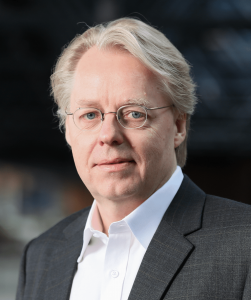 Prof. Hesthaven received an M.Sc. in computational physics from the Technical University of Denmark (DTU) in August 1991. During the studies, the last 6 months of 1989 was spend at JET, the european fusion laboratory in Culham, UK. Following graduation, he was awarded a 3 year fellowship to begin work towards a Ph.D. at Risø National Laboratory in the Department of Optics and Fluid Dynamics.

During the 3 years of study, the academic year of 1993-1994 was spend in the Division of Applied Mathematics at Brown University and three 3 months during the summer of 1994 in Department of Mathematics and Statistics at University of New Mexico. In August 1995, he recieved a Ph.D. in Numerical Analysis from the Institute of Mathematical Modelling (DTU).

Following graduation in August 1995, he was awarded an NSF Postdoctoral Fellowship in Advanced Scientific Computing and was approinted Visiting Assistant Professor in the Division of Applied Mathematics at Brown University. In December of 1996, he was appointed consultant to the Institute of Computer Applications in Science and Engineering(ICASE) at NASA Langley Research Center (NASA LaRC).

In January 2003, he was promoted to Associate Professor of Applied Mathematics with tenure and in May 2004 he was awarded Philip J. Bray Award for Excellence in Teaching in the Sciences (the highest award given for teaching excellence in the sciences at Brown University).

He was promoted to Professor of Applied Mathematics as of July 2005.

From October 2006 to June 2013, he was the Founding Director of the Center for Computation and Visualization (CCV) at Brown University.

As of October 2007, he holds the (honorary) title of Professor (Adjunct) at the Technical University of Denmark.

In November 2009, he successfully defended his dr.techn thesis at the Technical University of Denmark and was rewarded the degree of Doctor Technices — the highest academic distinction awarded based on… substantial and lasting contributions that has helped to move the research area forward and penetrated into applications.

As grant Co-PI he served from Aug 2010 to June 2013 as Deputy Director of the Institute of Computational and Experimental Research in Mathematics (ICERM), the newest NSF Mathematical Sciences Research Institute.

After having spend his entire academic career at Brown University, Prof. Hesthaven decided to pursue new challenges and joined the Mathematics Institute of Computational Science and Engineering (MATHICSE) at Ecole Polytechnique Fédérale de Lausanne (EPFL) in Switzerland in July 2013, being appointed as the Chair of Computational Mathematics and Simulation Science. He maintains a position as Professor of Applied Mathematics (Adjunct) at Brown University. On February 2014, the new EPFL unit of Scientific IT and Application Support (SCITAS) was created under the leadership of Professor Hesthaven. The mission of SCITAS is to support and enable research in high-performance computing across EPFL with responsibility for support, development and education related ot high-performance computing. On March 2014, Prof Hesthaven was elected as fellow of SIAM for contributions to high-order methods for partial differential equations. Fellows amount to less than 5% of the total membership and are selected by peers in recognition of distinguised contributions to their discipline.  February 1, 2017, Prof Hesthaven was appointed Dean of the School of Basic Sciences with the responsibility for the Institutes of Mathematics, Physics, and Chemistry at EPFL.