Most clinically used drugs are small molecules or proteins. Molecules of these two major drug classes differ much in their properties. Strengths of small molecules are the oral availability, cell permeability, tissue penetration and accessibility to chemical synthesis. Strengths of protein therapeutics are high binding affinity and target specificity.

Peptide macrocycles (shown above in the middle) can potentially combine favorable properties of both major molecule classes. For example, they may bind as tightly and specifically as antibodies while being small enough to diffuse into tissues.

In our laboratory, we aim at developing peptide macrocyles for potential therapeutic application (Heinis, C., et al., Chimia, 2011). We mostly work with bicyclic peptide structures as the one shown below. Due to the relatively rigid conformation of bicyclic peptides, they can bind with high affinity and specificity to protein targets.

We routinely generate bicyclic peptide ligands to disease targets using a phage based strategy that has been developed by Christian Heinis and Sir Gregory Winter at the Laboratory of Molecular Biology (LMB) in Cambridge, UK (Heinis, C., et al., Nat. Chem. Biol., 2009). Briefly, cysteine-rich peptides displayed on phage are reacted with a small organic linker to form bicyclic peptide structures. Large combinatorial libraries (> a billion variants) of peptide macrocycles (bound to phage) are isolated in affinity selections. The identity of the peptide is revealed by sequencing the encoding DNA that is enclosed in the phage particle.

Aiming at developing peptide macrocycles with defined structures in solution, we designed new chemical linkers that have the potential to serve as nucleating scaffolds in bicyclic peptides. We found that structurally diverse linkers impose different conformations onto the peptide backbones (Chen, S., et al., ChemBioChem, 2012).

Towards the development of therapeutics

The ultimate goal of our research efforts is the development of therapeutics. We are currently developing potent antagonists to a range of disease targets. We have chosen medical indications in which bicyclic peptides promise advantages over small molecules and monoclonal antibodies.

We have developed bicyclic peptide inhibitors of urokinase-type plasminogen activator (uPA), a serine protease which is implicated in tumour growth and invasion. Structure analysis of the inhibitor/target complex revealed a large contact interface of the bicyclic peptide and explained the good binding properties (Ki = 52 nM) (Angelini, et al., ACS Chemical Biology, 2012). We are currently testing this inhibitor in vivo.

In collaboration with Bicycle Therapeutics, we have recently developed bicyclic peptide antagonists of the serine protease plasma kallikrein. Inhibitors of plasma kallikrein have potential application in hereditary angioedema, a life-threatening disease characterized by local swelling in subcutaneous tissue and organs. We were able to engineer an inhibitor that blocks human plasma kallikrein and its orthologs while sparing paralogous proteases (Baeriswyl, V., et al., ChemMedChem, 2012).

We found that bicyclic peptides are significantly more stable than linear peptides and largely resist proteases in the blood circulation. A bicyclic peptide (UK18) that we conjugated to an albumin-binding peptide (SA21; Dennis, M., et al., JBC, 2002) remained in the blood circulation of mice for several days (Angelini, A., et al., J. Med. Chem., 2012). 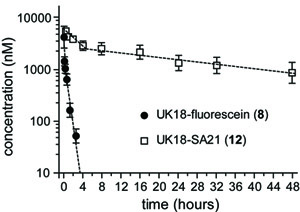