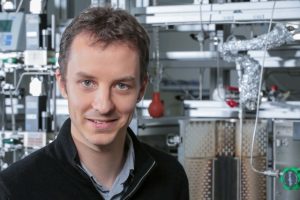 Jeremy Luterbacher was born in Switzerland and received a bachelor’s and master’s degree in Chemical Engineering from the Swiss Federal Institute of Technology in Lausanne, Switzerland in 2007. To fulfill his master’s research requirements, he spent a year as a visiting scientist at the Massachusetts Institute of Technology (MIT) working on hydrothermal biomass gasification in Prof. Jeff Tester’s lab. Along with Jeff Tester, who co-advised his PhD, Jeremy then moved to Cornell University in Ithaca, New York to pursue doctoral studies in Prof. Larry Walker’s lab. At Cornell, Jeremy worked on biomass pretreatment and enzymatic hydrolysis of biomass. He was awarded the Austin Hooey Graduate Research Excellence Recognition Award by the Cornell Department of Chemical and Biomolecular Engineering for his work.

After receiving his PhD, Jeremy joined the U.S. Department of Energy Great Lakes Bioenergy Research Center at the University of Wisconsin-Madison as a Swiss National Science Foundation Postdoctoral Scholar. At the University of Wisconsin, Jeremy worked for two years on solvent-aided chemical biomass depolymerization and aqueous phase catalytic reforming under the supervision of Prof. Jim Dumesic. In 2014, Jeremy returned to EPFL as a Tenure-Track Assistant Professor and head of the Laboratory of Sustainable and Catalytic Processing.