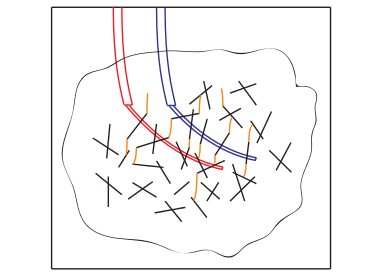 The production of electricity from deep geothermal resources is based on the circulation of fluid between two or more wells. Hot fluids are produced and feeded in geothermal power-plant. The cooled fluid is re-injected in the reservoirs – i.e. in a so-called geothermal doublet. Thanks to the abundant occurrence of temperature larger than 150°C at depth  ~4 kilometers below the earth’s surface, deep geothermal resources hold the promise of providing clean base-load electricity independent of location. Unfortunately, at those depth, the rock permeability is typically too low to allow fluid circulation at economical flow rates. It is therefore necessary to engineer the permeability of the geothermal reservoir in order to obtain a sufficiently large heat flux on surface. This is achieved via hydraulic stimulation.

We are currently developing a theoretical framework for the modeling of mixed-mode fluid driven propagation geared toward the stimulation of geothermal reservoirs. More generally, these tools are able to address the propagation of localized deformation features in geomaterials (faults, shear-bands, fractures) driven by multi-physics loading.