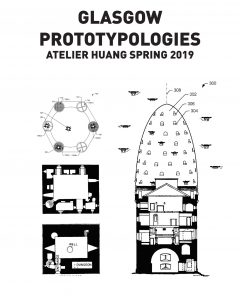 Whether we like it or not, the near future will be defined by automation, artificial intelligence, smart infrastructure and urban intensification. This rapidly approaching reality begs several questions: How will we co-exist with machines? How will we perceive and relate to destinations with unpopulated architecture?

Once again, during the spring semester, Glasgow is our case study city; a place where manufacturing previously offered a base for the local economy but has receded during the last forty years of globalization. What is the role of housing when the factory, the yard or the shop as a typical workplace is disappearing? In this context the focus will be on re-inventing the Galsgowian tenement typology into a new form that will integrate into existing gaps, corners, empty blocks or new land.

The traditional tenements of Glasgow are a renowned architectural typology of the city of Glasgow. The majority of which were built during the Victorian Industrial revolution (1840-1920), which caused a massive urbanization and a need to house thousands of workers. Tenements were preferred by people from every social stratum; however, their size was dependent to the affluence of the area and of their residents. Traditional tenements have a front door, which opens to a shared ‘close’ and to a common stairwell whose landings at every floor provide access to 2-3 individual apartments. The apartments size may range from very small to very big apartments. The majority of them offered large rooms and high ceilings. Their overall building height can vary from two to five storeys and although they provide uniformity in the city, the different limestone used give variety of coloration (beige, grey, red). Other elements that architects experimented with were the design of the bay window, the spacing between windows and cornicing ornamentation. 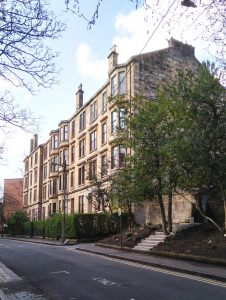 What would be the tenement of the future? Which elements may alter to accommodate for new ways of living, working and inhabiting residential space? How much populated and how much automated space we need to accommodate as architects for the citizens of the (near) future? And equally importantly, how will the exchange of goods may impact the architecture of the past?

At the core of the studio lies the assumption of a drone delivery platform. This means that small to medium sized cargo can interdependently move from any point in the city by drone through an external operator. Landing such aircraft in the immediate surroundings of buildings at street level is both impractical and poses several security issues, from damage to the drone or other objects and threat of injury to pedestrians, animals or plants. What if the drone port landing platform could be integrated in the building, supplying each apartment individually?