Nicolas Grandjean received a PhD degree in Physics from the University of Nice – Sophia Antipolis in 1994 and shortly after joined the French National Center for Scientific Research (CNRS) as a permanent staff member. In 2004, he was appointed tenure-track Assistant Professor at the EPFL and promoted Full Professor in 2009. From 2012 to 2015 he was heading the Institute of Condensed Matter Physics. In 2016, he was visiting professor at the UCSB. He was awarded the Sandoz Family Foundation grant for Academic Promotion and received the “Nakamura Lecturer” Award in 2010 and the “Quantum Devices Award” at the 2017 Compound Semiconductor Week. His research interests are the physics and technology of III-V nitride semiconductors. CV available here

Raphaël Butté was born in Paris, France, in 1973. He received the PhD degree from the University Claude Bernard, Lyon, France, in 2000 for his research on the structural and optoelectronic properties of hydrogenated nanostructured silicon thin films with potential applications for photovoltaics and thin film transistors.

He then moved to the University of Sheffield (2000-2003), UK, to work as postdoctoral research associate in the group of Prof. Maurice S. Skolnick (Fellow of the Royal Society).

In 2004, he moved to Ecole Polytechnique Fédérale de Lausanne (EPFL) as scientific collaborator in charge of optical spectroscopy at LASPE, a newly established laboratory directed by Prof. Nicolas Grandjean.

In 2010, he became permanent member of staff (Scientific Collaborator and Lecturer). He was promoted to the position of Senior Scientist in 2016.

In 2012, he was one of the 149 scientists recognized by the Outstanding Referee program (http://publish.aps.org/OutstandingReferees) of the American Physical Society (APS) selected from a pool of roughly 60,000 currently active referees.

From September 2013 until December 2017, he was one of the Editors of the journal “Superlattices and Microstructures” (Elsevier).

For his PhD (2012-2014) Mayeul obtained his own funds from the French National Association for Technological Research (ANRT) for conducting an experimental physics project in a joint industrial academic supervision. With Dr. Debuischert from Thales Research & Tehcnology the Thales S.A. Research center in Palaiseau (France) and Prof. Roch from “École Normale Supérieure (ENS) Paris-Saclay” at that time based in Cachan (France), he explored, from scratch, the use of ensembles of Nitrogen-Vacancy (NV) centers in diamond for mapping magnetic fields at the microscopic scale. He evidenced their applications in detecting failures in integrated circuits and in performing real time spectral analysis of radio-frequency signals.

For his first posdoc (2015-2018), Mayeul joint the group of Prof. Schirhagl in Groningen (The Netherlands), that had started a few months earlier. He applied there his acquired knowledge in diamond based magnetometry to cell biology. In charge of leading the physics part of Prof. Schirhagl’s cross-disciplinary project, Mayeul helped in demonstrating the use of nanodiamonds holding NV centers to monitor the stress state of individual living cells, in real time, and without perturbating their biology. He also invented an original method based on NV centers to perform the Electron Spin or Nuclear Magnetic Resonances (ESR or NMR) spectroscopy, much faster and requiring with much less sample volume than conventional methods.

For his second postdoc (2019), Mayeul went back to ENS-Paris-Saclay to develop diamond-based magnetometry methods under high hydrostatic pressure (above 100 GPa). With Prof. Becher (University of Saarland) and Prof. Roch, he explored the spectroscopy of Silicon and Germanium-Vacancy (SiV and GeV) centers in diamond under high pressure and their use as in situ pressure gauge in high hydrostatic pressure experiments.

Ambizione Project since 2020. Finally, Mayeul Chipaux get funded by the Swiss National Science Foundation a four years long independent project in the Laboratory for Advanced Semiconductors for Photonics and Electronics (LASPE) of Prof. Grandjean in École Polytechnique Fédérale de Lausanne (EPFL). With his doctoral student Ms. Hoda Shirzad, he is exploring original methods to coherently control individual NV centers’ spins with spatial selectivity down to a few nanometers.

Publication. At the date of January 1st 2020, Mayeul has, published 12 peer reviewed articles including 4 as first authors and 2 as corresponding authors. He also filled 3 first inventor patents, one being already exploited by Thales and another that is to be licensed by a spin-off company “Diamond sense”.

Szymon Stanczyk received his PhD degree from the Institute of High Pressure Physics PAS (Unipress), Warsaw, Poland, in 2022. His research was concentrated on the opto-thermo-electrical prosperities of III-N based laser diodes and other stimulated-emission-based optoelectrical devices. He is an author or co-author of 32 peer-reviewed articles and gave 12 presentations on international conferences (IWN, ICNS, Photonics West, LEDIA). His interest in optical gain of III-N devices and their technology led him to join the Laboratory of Advanced Semiconductors for Photonics and Electronics (LASPE) at EPFL as a post-doc.

Pierre Demolon was born in Douai, France, in 1982. He received a PhD degree in Physics from the University of Nice-Sophia Antipolis in 2010 for his work on the elaboration of laser diodes based on III-N materials.
He worked for a year as a production and R&D manager in the company OptoGaN GmbH in Dortmund.
Between 2011 and 2016 he worked as a project manager at EPFL, firstly for the LASPE’ laboratory in view to grow GaN materials helped by a plasma source, and then for the Swiss Plasma Center on the deposition of microcrystalline silicon on glass for solar cells applications.
He joined the CERN between 2016 and 2018 as a development project manager where he worked on the development of a coating process to deploy “in-situ” a thin film of amorphous carbon with a low Secondary Electron Yield in the beam screens of the Large Hadron Collider (LHC) magnets.
From 2019 to 2022, he joined the company Alpes Lasers SA. He was in charge of the process development for the Quantum Cascade Lasers (QCL) and Interband Cascade Lasers (ICL). He was also jointly responsible for the production of QCLs and ICLs.

Thomas Weatherley received his BA and MSci degree in materials science at the University of Cambridge in 2018. For his master’s project he used photoconductive atomic force microscopy to analyse InGaN films. Currently he is pursuing his PhD in photonics at EPFL, with his research investigating the effect of alloy disorder on the properties of III-nitride heterostructures.

Yao Chen received her BSc and MEng degree in materials science and engineering at the Technical University of Madrid (UPM). During the last year of her master, she worked on the blue LEDs featured with GaN-based tunnel junction contacts for her master project at the Laboratory of advanced semiconductors for photonics and electronics (LASPE). Currently, she is pursuing her PhD in photonics at EPFL.

Danxuan Chen received her BSc degree in physics at the University of Wuhan and the University of Lyon (a four-year double diploma program). After that, she did a MSc in applied physics at EPFL. During her master project at LASPE, she studied the defects in InGaN quantum wells. After graduation, she worked as a software engineer at Attolight (Lausanne) to improve their software for cathodoluminescence analysis. She is currently pursuing her PhD in physics at EPFL.

Johann Stachurski attended a prep school in France (Lycée Joffre) before joining EPFL at the end of his bachelor’s degree. He received his BSc and MSc degree at EPFL in 2019. During his master project, he worked on the characterization of GaN quantum dots using micro-photoluminescence techniques. He is pursuing his PhD in the Laboratory of Advanced Semiconductors for Photonics and Electronics (LASPE). 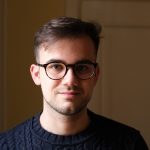 
Hoda Shirzad received her Bachelor’s and Master’s degrees in physics at the Sharif University of Technology (SUT). For her master’s project, she collaborated to develop a software package in the field of computational soft condensed matters called “Virtual Cell Model” to simulate the cellular uptake.
She is currently pursuing a Ph.D. in the Laboratory of Advanced Semiconductors for Photonics and Electronics (LASPE) at EPFL under the supervision of Dr. Mayeul Chipaux.

Pierre Lottigier is a young Photonics Engineer: he graduated from the Institut d’Optique (IOGS, Paris area, 2016-2019). During his studies, he worked on Ti:Sapphire ns-pulsed lasers for plasma spectroscopy at the Laboratory for Plasma Physics (Ecole Polytechnique, Paris area, 2016-2019).
His interest in light-matter interaction led him to study and receive the Laser Optics Matter MSci degree from Université Paris-Saclay in 2019, introducing him to semiconductors’ nanophotonics.
Within this field, he chose to pursue a PhD at EPFL, investigating quantum optical properties of blue-emitting GaN nanobeam lasers.

Nadja Dekumbis started working at EPFL in 2009 as an apprentice in business administration in Mathematics institute and she received her diploma in August 2012.
Since November 2012, she has been working in physics as a secretary for Professor Nicolas Grandjean’s laboratory. (LASPE)