Since the discovery of frequency combs1-3 at the Max-Planck Institut für Quantenphysik (MPQ) in Munich and the National Institute for Standards and Technology (NIST) in Boulder in 1998, which was decorated with the Nobel price in 2005, more and more applications in metrology, science and the industry have emerged. In metrology frequency combs have been used to construct all-optical clocks which vastly improve on the precision of state-of-the-art atomic clocks. These optical clocks deviate by less than a second over a time as long as the age of the universe. In the physical sciences frequency combs allow the precise measurement of optical frequencies and the generation of extremely short pulses. In astronomy they can ensure high precision and continuity of the optical equipment over decades which is essential for long term measurements to find earth-like planets in other solar systems. In life-science frequency combs allow for fast spectroscopy of chemical processes and therefore enable a real time monitoring of what keeps things alive.

Frequency combs can be seen as many single frequency, continous-wave lasers whose emission frequencies are different but equidistant and whose emission is coherent between all the lasers. Conventionally frequency combs generated using pulsed, mode locked lasers – the time frequency duality implies that an ultra-short pulse laser will create an optical comb in the frequency domain. A more detailed description of frequency combs can be found in References 2,3. This techniques has come a long way since 1998 but some limitations are hard to overcome. One of these limitations is the minimal size that a conventional pulsed laser has to have as it is made up of several discreet components. The actual physical size is not as much a restriction as the result thereof, namely the limit in inverse round trip time to below 10 GHz. 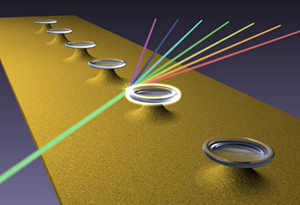 Figure 2. Figure 1a shows an artistic view of a microtoroid made of silica, which is pumped with a laser of one single wavelength (green line on the left side of the image). Nonlinear processes within the cavity generate light of other colors. Unlike in a normal prism that can generate a continous colorful spectrum from sunlight, the microresonator generates just certain colors (light frequencies) that have exactly the same color difference (frequency difference). 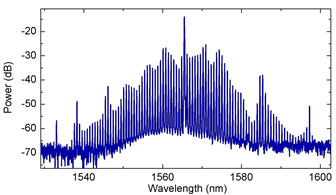 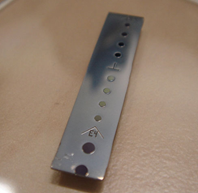 Figure 3 shows the optical spectrum generated from a 375 μm diameter microtoroid. The wavelength that was used for this experiment is in the infrared region which is invisible for the human eye. The left image shows the 5 mm wide chip with the optical silica microresonators.

In 2007 our Laboratory of Photonics and Quantum Measurement demonstrated a disruptive technology that allows the generation of optical frequency combs on a chip4. At the MPQ our group developed a technique to generate frequency combs4 using silica micro-resonators5 which have approximately the diameter of a human hair.

The underlying process is the nonlinear parametric frequency conversion via the Kerr nonlinearity of silica6. The parametric conversion annihilates two pump photons and creates pairs of quantum correlated signal and idler photons (cf. Figure 2). This process cascades as the sidebands interact with each other and with the pump and eventually many resonances of the resonator are populated by sidebands and together they form a frequency comb.

The frequency conversion can be remarkable efficient7 and can enable the generation of octave spanning spectra, i.e. a spectrum that covers a factor of two in frequency8,9.

Since the microcavity exhibits dispersion it is not a priori expected that all the generated sidebands are equidistant. Surprisingly, high precision measurements with a conventional frequency comb as reference revealed that the generated sideband’s deviation from the equidistant position is smaller than 0.0014 Hz (!) which corresponds to a relative accuracy in the order of 10-18 when normalized to the optical pump frequency of 200 THz (2×1014 Hz).

From these first proves of principal the development quickly spread to multiple research groups and evolved. Over the past years there has been a variety of other microresonator geometries10 in which these “Kerr” frequency combs have been generated: crystalline resonators11, integrated silicon nitride12 and Hydex microresonators13 as well as fiber based cavities.

These different systems posses different advantages and disadvantages8. Especially with possible applications in mind our group has therefore established a multiple-platform strategy. Right now this encompasses the original micro toroids, crystalline resonators made of magnesium flouride and waveguide resonators made of silicon nitride. Our main working horses are the latter two. We are also actively venturing into new possible materials for resonators.

One particular advantage of the crystalline resonators is the large transparency windows which extends deep into the infra red. In principle this enables the generation of frequency combs in the mid-infrared, a wavelength range which is of particular importance for molecular sensing and therefore of great practical interest. Making use of this material advantage our group recently presented the first frequency comb in this wavelength regime14.

One obstacle had to be overcome in order to bring the microresonator frequency combs closer to applications: Frequency combs generated in silicon nitride and in crystalline resonators exhibited a frequency noise with a too high amplitude in the spectrum which was visible when measuring the repetition rate of the combs. As it turned out the reason for this noise is not of external nature as it was often assumed before but it is intrinsic to the comb formation process. However, the understanding lead to new measures to overcome this problem and low noise frequency combs generated in silicon nitride microresonators were shown15. 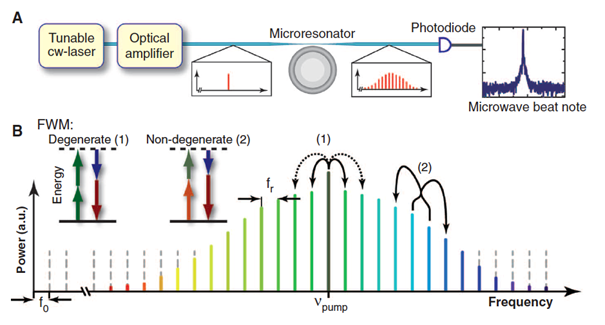 Figure 4. a. Principle of optical frequency comb generation using optical microresonators. (A) An optical microresonator (here, a silica toroid microresonator) is pumped with a CW laser beam. The high intensity in the resonators (~GW/cm2) gives rise to a parametric frequency conversion through both degenerate and nondegenerate (i.e., cascaded) Four wave mixing. Upon generation of an optical frequency comb, the resulting beatnote (given by the inverse cavity round-trip time) can be recorded on a photodiode and used for further stabilization or directly in applications. (B) Optical frequency comb spectrum, which is characterized by the repetition rate (fr) and the carrier envelope frequency (fo). In the case of a micro-resonator based frequency comb, the pump laser is part of the optical comb. The comb is generated by a combination
of degenerate FWM (process 1, which converts two photons of the same frequency into a frequency upshifted and downshifted pair of photons) and nondegenerate FWM (process 2, in which all four photons have different frequencies). The dotted lines indicate degenerate FWM into resonator modes that differ by more than one mode number. The presence of cascaded FWM is the underlying process that couples the phases of all modes in the comb and allows transfer of the equidistant mode spacing across the entire
comb. 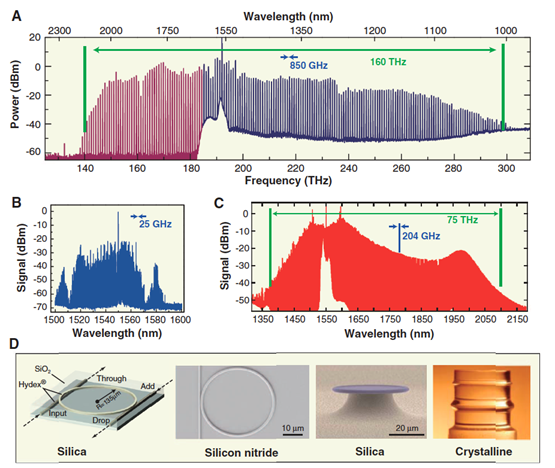 The applications of this novel class of frequency comb generator are diverse. The essential features are unprecedented compactness, high integrability and a large range of high to very high repetition rates. This makes the systems promising for many applications which give size a high priority such as optical systems for navigation and space as well as applications which require a large spacing between the comb lines:

Astrophysical spectrometer calibration: It has been proposed16,17 and shown18 that frequency combs can be used to calibrate solar spectrometers, such as those employed in the search of exoplanets. A challenge in this application is that the comb is required to have a large mode spacing typically greater than 10 GHz due to the low resolution power of astrophysical spectrometers. This can be readily achieved with microresonators. The image below shows the output of a 88 GHz micoresonator comb on the echelle spectrometer X-Shooter. The horizontal lines denote the optical frequency comb components, which are clearly separated in this spectrum.

Spectroscopy: Frequency combs can also be used in spectroscopy, to detect and measure optical absorption spectra. In particular the ability to have two optical frequency combs, that exhibit slightly different repetition rates is appealing as this allows to use the principle of multi heterodyne spectroscopy and thereby create a comb in the RF frequency domain that contains the spectroscopic information of the molecules under investigation.
Awards to Monolithic frequency combs technology
The discovery of monolithic frequency combs has been recognized in several ways. In 2009 the Helmholtz Price in Metrology was awarded to TJ Kippenberg, P. Del Haye and Ronald Holzwarth. In 2011 TJ Kippenberg received the EFTF Young Investigator Award. The technology has been recently reviewed in Science Magazine. The technology has moreover been selected by the US DARPA and is part of the research program QuSAR.