The theme of this project is the investigation of optomechanics – light coupled to mechanical motion at the microscale – using superconducting circuits in the microwave domain [1]. The idea is to create an inductor-capacitor circuit made out of a thin film superconductor where the capacitor is mechanically compliant, i.e. one of its electrodes is a suspended membrane [2]. As this membrane vibrates, it modulates the capacitance and, in turn, the resonance frequency of the microwave cavity. The microwave field also exerts pressure on the capacitor plates. The superconducting circuit architecture provides an agile platform to extend standard optomechanics to multimode optomechanics, where multiple microwave modes are coupled to the same mechanical mode (or to multiple mechanical modes). It also connects optomechanics to circuit quantum electrodynamics, a field which has gained a lot of momentum due to its potential for a scalable quantum computer. We are pursuing several directions in circuit optomechanics. 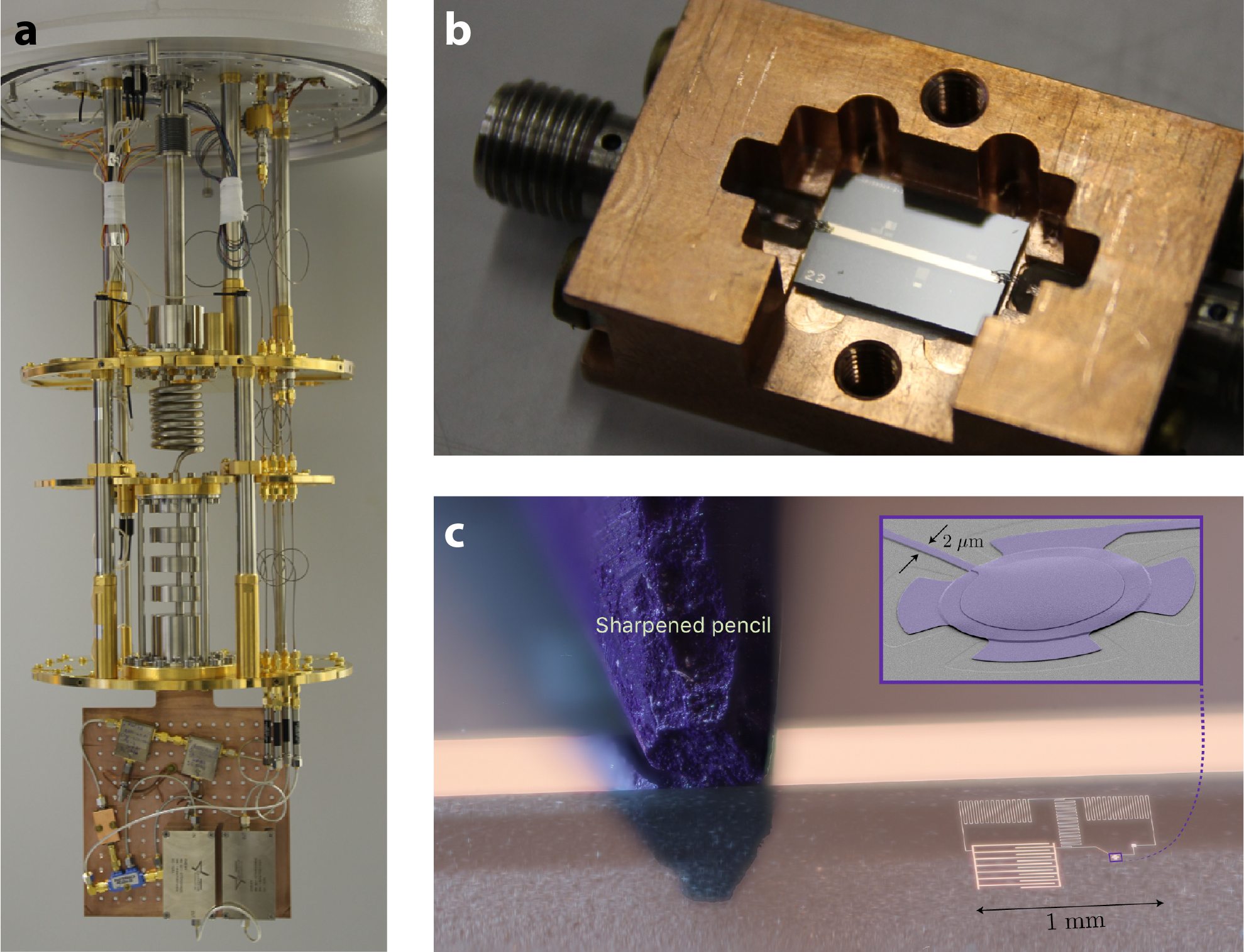 Fig. 1 caption: The experimental setup and the multimode electromechanical device. a) The experiments are performed in a dilution refrigerator capable of achieving 10 mK at base temperature. b) The optomechanical circuit is fabricated on a sapphire chip and measured in a copper sample holder. The chips are fabricated at the Center of Micronanotechnology (CMi) at EPFL. c) The circuit supports two electromagnetic modes which are both coupled to the motion of a small, micrometer-scale membrane (shown as inset).

Interestingly, in this regime dynamical back-action occurs on microwave light (as opposed to the mechanical element as in standard optomechanics), and one can control the susceptibility of the microwave mode by tuning its coupling to the mechanical reservoir [4-5].

Quantum-limited amplification of microwaves and masing

​Once the reversed dissipation regime is achieved, one can use it to amplify microwave signals with minimum added noise – as dictated by quantum mechanics – provided that the mechanical element is close to its quantum ground state. These types of amplifiers are called quantum-limited amplifiers and they have become technologically feasible and relevant in the field of quantum technologies (quantum computing, quantum sensing etc.) in recent years. We have performed the first realization and characterization of such a device based on the mechanical reservoir [4]. Once the parametric instability threshold is reached, backaction amplification leads to stimulated emission of microwaves and maser action using the mechanical oscillator as the gain medium.

Nonreciprocal microwave devices based on optomechanics

Nonreciprocal devices such as isolators or circulators are central to radio-frequency and microwave signal processing and also in optical systems. In the microwave domain, commercially available non-reciprocal devices are based on magnetic materials. They are inherently lossy, cannot be integrated on chip and employ ferrite materials or magnetic fields. Therefore, non-magnetic alternatives are highly sought-after in the field of quantum information processing. Exploiting the multimode optomechanical platform, it is possible to construct a system with nonreciprocal behaviour [6-8]. In these experiments, an additional mechanical mode is used. We demonstrated over 20 dB of isolation and the reconfigurability of the direction of isolation by tuning the relative phase of the control pumps.