April 4, 2017
Guillaume Habert
material engineer, professor ETH Zürich
followed by a prensetation of terrabloc and a debate with the EPFL students in architecture and engineering, and Pierre Frey, Corentin Fivet, Roger Boltshauser

Earth is becoming increasingly popular in contemporary architecture. Hundreds of buildings of superior aesthetic and technical quality are emerging across the world and arousing the curiosity of the media and of professionals. To highlight the beauty of these projects and show the sustainable benefits of earthen construction, a group of enthusiasts launched the TERRA Award in 2015: the first international prize for contemporary earthen architectures.

In 2016, a selection committee selected 40 buildings from across 27 countries and all five continents. They will be showcased in a book, a travelling exhibition and a database dedicated to 21st century international earthen architecture. On July 9, 2016, an international award committee, chaired by Wang Shu, selected nine winners.

Earth is one of the major building materials of tomorrow’s architecture. Widely available all over the planet, it requires little energy for its production and is appropriate for sustainable and affordable housing. The TERRA Award, launched under the auspices of the UNESCO Chair ’’Earthen architectures, construction cultures and sustainable development”, aims to highlight exemplary buildings which make appropriate use of this material. It is a first step towards the acknowledgement of earthen architecture by professionals and the general public. This prize celebrates the audacity, creativity and the skills of all stakeholders involved in earthen architecture.

CRAterre is the main project promoter of the TERRA Award.
Since 1979, the International Center for Earthen Architecture has worked towards the recognition of earthen construction as a valid response to the challenges linked to the protection of the environment, the preservation of cultural diversity and the fight against poverty.

The workshop ‘matières à construire’ – material for construction (amàco) is a research and experimentation center which aims to value in a sensitive and poetic way the most common raw materials: sand, earth, water, wood, air, straw, and so on. At the crossroads of multiple perspectives on materials – scientific, artistic, technical, architectural and philosophical – the amàco team develops a pedagogy inspired by a new conception of the idea of innovation, primarily based on a rediscovery of the engineering simpleness. Its ambition is to transformed our relationship to the world through the understanding of the materials that constitute it, and thus bring about new practices in adequacy with the human and the territory. 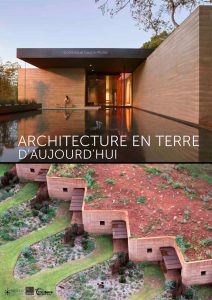