Started from July 2016, we are performing a clinical trial on 48 acute-subacute stroke patients to compare the personalized approach with other approaches, including the standard physiotherapy and a standard robotic therapy. The clinical trial is a multicentric study, taking place at the Hôpitaux Universitaires de Genève (HUG), Switzerland, where 7 patients have been enrolled so far (5 in the last year), and at the University Hospital of Pisa, Italy, where 4 patients have been enrolled until now (all of them in the last year). The participants are randomly assigned to 3 groups: conventional therapy without the use of robotic devices (group 1); traditional robot-assisted rehabilitation protocol (3-D point-to-point reaching movements) with the exoskeleton ALEx (group 2); automatic personalized robot-assisted rehabilitation protocol (3-D point to point reaching movements) with ALEx (group 3). They all went through 4 weeks of training preceded and followed by two evaluations, see Figure 1. We also collected data of 9 healthy control subjects. 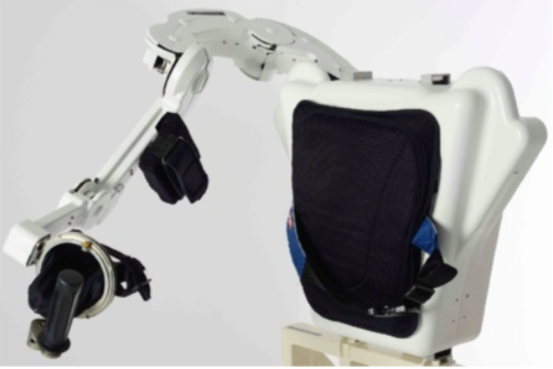 Before and after the training, we are performing a massive longitudinal assessment, including kinematic, magnetic resonance imaging (MRI), electroencephalography (EEG) and electromyographic (EMG) recordings in order to define the neurobiomechanical state of each patient and its evolution during the treatment. This will allow us to improve the personalization with the information extracted by the factorization analysis of muscular activity, which better characterizes the motor and physiological deficits of the patient (Cheung, Turolla et al. 2012), and with the analysis of the EEG signals and MRI to better understand the neural correlates of central nervous system learning/recovery mechanisms. 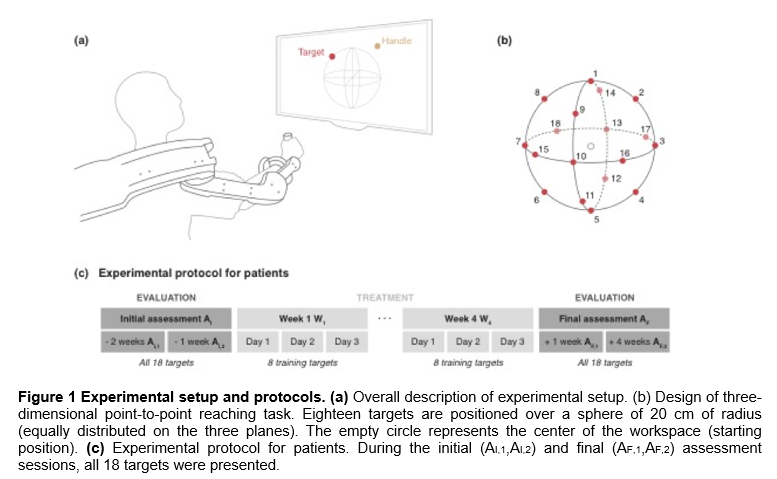 We developed the personalization algorithm capable of selecting training tasks based on the subject’s motor improvement and we performed an initial study on a group of 17 healthy subjects. They executed with ALEx the same 3-D reaching task as the patients recruited in the clinical trial, and we proved that our algorithm was capable of tracking motor improvement and adjusting the task difficulty accordingly. This work has been submitted on December 2017 to Journal of Neural Engineering. After this test we then used the personalization algorithm online also with stroke patients.

Concerning the data collected so far from the stroke population, it is too early to draw any definitive conclusion because the three groups are not fully populated yet. Nevertheless, metrics extracted from the clinical scales, kinematic and EMG data collected during the assessments show that functional improvements seem to be higher following robotic therapy. With training patients in general become faster, smoother and need less assistance from the robot Furthermore, there was an increase in the number of muscle synergies from the beginning to the end of the study and this evolution is in agreement with the improvement of motor abilities. he structure of muscle synergies was also highly modified during the treatment compared also with healthy subjects.

If you are interested in this research topic and wish to learn more, don’t hesitate to contact us: