Amputation of the upper extremity causes severe and permanent disability, because the hand plays a central role in our ability to explore and interact with the outside world. Strategies to replace a missing rely on replacing the extremity with an artificial equivalent. The most promising approach relies on the use of motorized prosthetic limbs which can be controlled by the wearer’s muscular activity, resulting in a relatively intuitive control interface. Such myoelectric prostheses can lead to encouraging gains in autonomy and quality of life, but remain riddled with various types of limitations. One of the major features which has yet to be implemented in a commercial system is the ability for prosthesis wearers to feel what the artificial limb is touching or how it is moving. Restoring meaningful sensory feedback is a challenging endeavor, which involves interfacing an artificial, electronic system with the nervous system in order to convey information. We are now investigating the possibility of decoding single finger movements proportionally from the surface EMG signal. To do this, we employ a multi-layer perceptron (MLP) to decode joint angles from each finger and actuate a virtual hand with the prediction results (Figure 2a). We are also implementing a “hybrid” controller gives the user some robotic assistance for object grasping (Figure 2b). We hypothesize that the assistance can improve grasp stability and lessen the effort of the user. 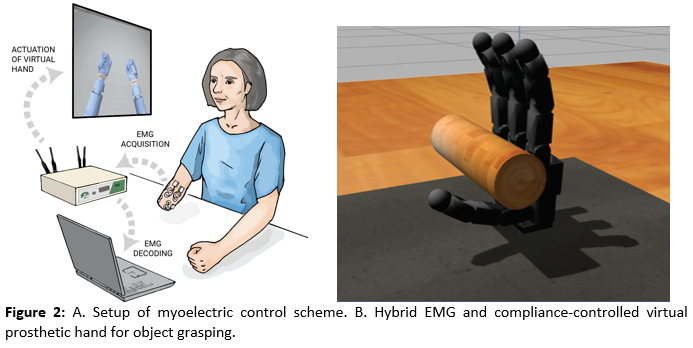 We previously demonstrated a successful strategy for restoring tactile sensations in upper-limb amputees using intraneurally implanted electrodes (Raspopovic et al., 2014). Despite this success, long-term implant stability and exploitability remains an area of active research. Recently, we concluded a long-term study with two amputees, providing the first demonstration of long-term stability and functional exploitability of transversal intraneural multi-electrode arrays (TIMEs) (Petrini et al., under consideration). Figure 1 shows the presence of rapid changes in the first two months (acute phase), followed by a plateau in terms of electrode impedance and number of functional active sites, offering evidence that this stability could be maintained for longer periods. 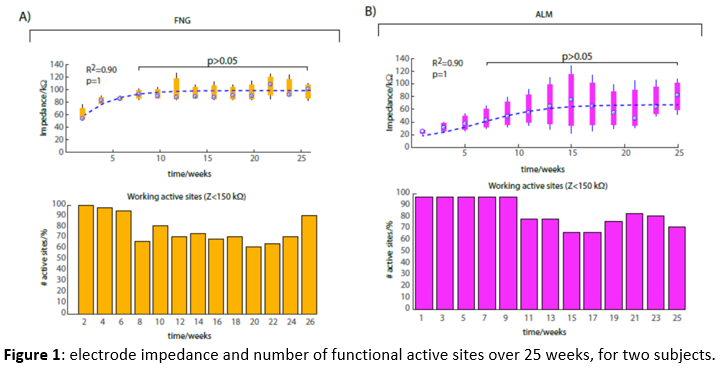 In addition to investigating long-term implant performance, we also concluded several studies with the aim of extending and improving the quality and type of sensory feedback provided to upper-limb amputees. Specifically, an area of great interest in the field has been the restoration of proprioceptive sensations. Using a hybrid approach, combining homologous neural stimulation and sensory substitution, we developed the first multi-modal upper limb prosthesis, capable of delivering simultaneous tactile and proprioceptive feedback (D’Anna et al., under consideration). Figure 2 shows the performance obtained with two amputees when exploiting both tactile and proprioceptive feedback concurrently. Both subjects could recognize object size and compliance accurately, providing evidence of the functional benefits that such a multi-modal approach could provide.

In order to truly translate hand prostheses research into real world applications, and “close the loop”, it is still necessary to determine the cognitive cortical mechanisms underlying tactile stimuli perception and to simultaneously achieve robust myoelectric control of the prosthesis. Advancements in feedback and control enable to overcome the barriers to effective usability of hand prostheses by patients and enable the personalization of post-stroke rehabilitation protocols. We are therefore investigating the spatio-temporal features and topographical distribution across the cortex of the Somatosensory Evoked Potentials elicited by tactile stimulation of different types: normal passive tactile stimulation (e.g., surfaces with different roughness), intraneural stimulation (amputees) and superficial electrical stimulation (healthy subjects and amputees). We will be also investigating the potential of high-density surface EMG (HDsEMG) to decode the movement intention and grasp in amputees. Advancements on these two aspects will improve the long-term efficacy and quality of hand prostheses, enabling in the future near-natural replacement of missing hands, as well as help devising new upper limb rehabilitation strategies. 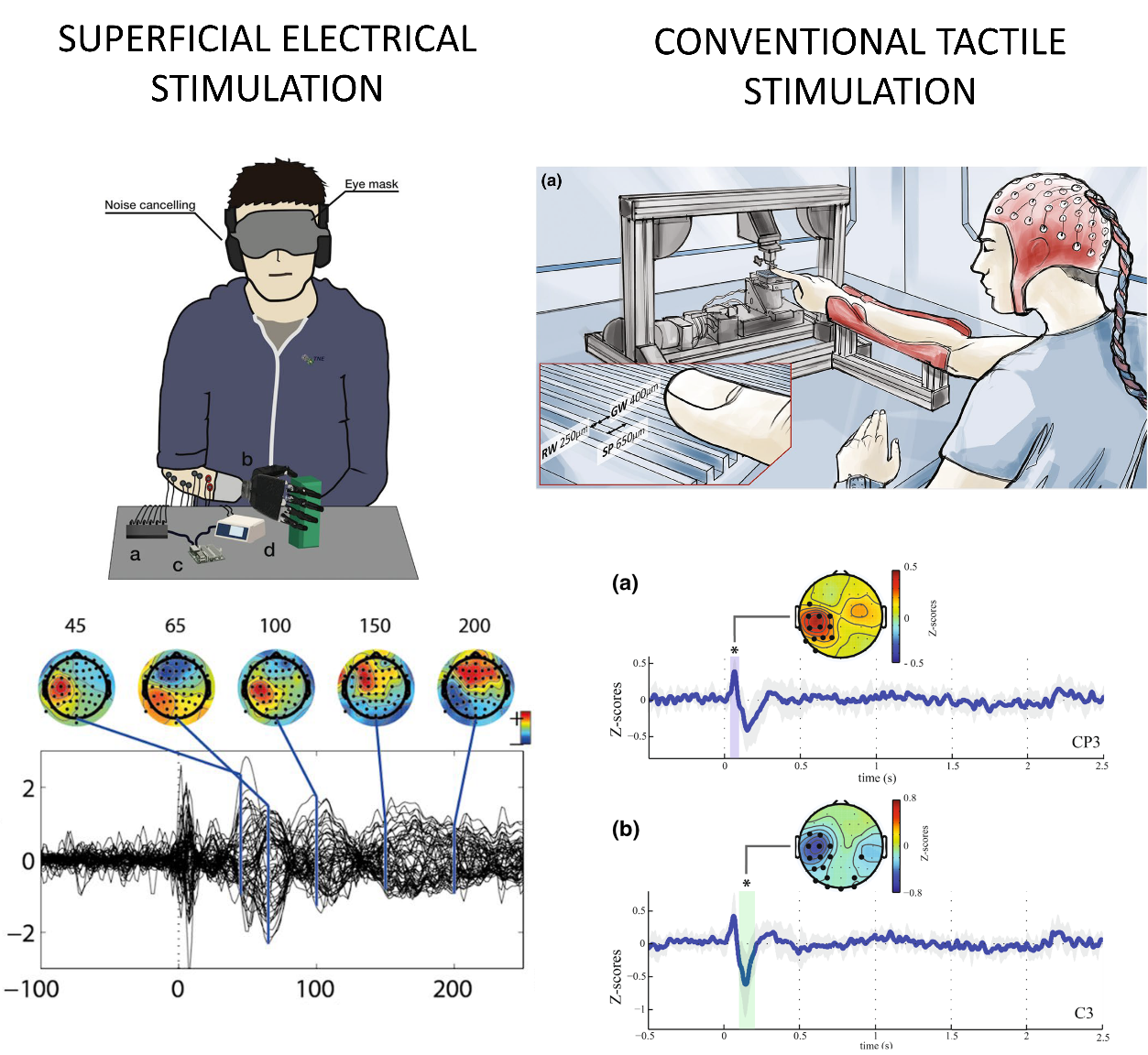 If you are interested in this research topic and wish to learn more, don’t hesitate to contact us: