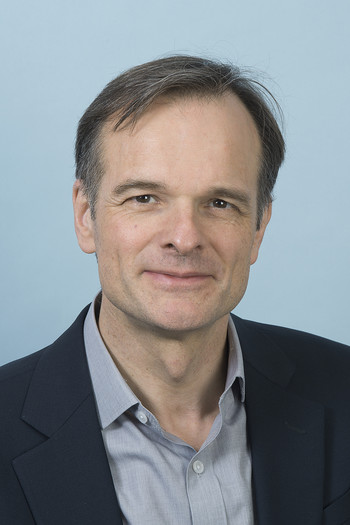 Gabriel Aeppli is professor of physics at ETH Zürich and EPF Lausanne, and head of the Photon Science Division of the Paul Scherrer Institut. All of his degrees are from MIT and include a BSc in Mathematics and Electrical Engineering, and MSc and PhD in Electrical Engineering. A large fraction of his career was in industry, where, starting as a work-study student at IBM and after his PhD moving to Bell Laboratories and then NEC, he worked on problems ranging from liquid crystals to magnetic data storage. He was subsequently co-founder and director of the London Centre for Nanotechnology and Quain Professor at University College London. Gabriel Aeppli also cofounded the Bio-Nano Consulting Company, of which he remains a non-executive director. He is a frequent advisor to numerous private and public entities worldwide (including China, Australia, Europe and the US) engaged in the funding, evaluation and management of science and technology. Honours include an European Research Council Award, the Mott Prize of the Institute of Physics (London), the Oliver Buckley prize of the American Physical Society, the Néel Medal/International Magnetism Prize of the International Union of Pure and Applied Physics, and election to the (US) National Academy of Sciences, the American Academy of Arts and Sciences, and the Royal Society (London).

Gabriel Aeppli’s scientific research is currently focused on the applications of nanotechnology and photon science to biomedicine and quantum information processing. Projects include the development of optical and microwave tools for medical diagnostics and pharmacology, where we are interested in new drug-target and antibody-antigen binding assays. We pay particular attention to obtaining specific, quantitative results, as well as to ease of use and (eventual) low cost for our engineered systems. Photons are also at the heart of efforts to control and read out quantum states in solids, including especially silicon, for which we exploit coherent, tunable pulses of THz radiation from a free electron laser. A related topic is adiabatic quantum computing, where calculations are performed by mapping problems onto networks of bits, and then relaxing the networks via quantum mechanics. This procedure is most easily modeled in the limits of very large networks using magnets (although programmable medium size networks containing of order 1000 bits are now being implemented using superconducting junctions), where the bits correspond to Ising spins with either up or down magnetization, and quantum mechanics is introduced via a “transverse” field, which allows tunneling between the up and down states.