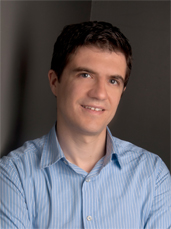 The research of Prof. Beat Fierz focuses on the study of the structure, dynamics and function of chromatin and related multi-protein complexes in vitro and in cells. These investigations require an interdisciplinary approach at the interface of chemistry, biology and biophysics.

Beat Fierz was born in Basel, Switzerland, and studied Molecular Biology at the Biozentrum of the University of Basel from 1998 – 2001. He then became interested in quantitative aspects of biology and obtained a Diploma in Biophysical Chemistry under the supervision of Prof. Thomas Kiefhaber in 2002.

Subsequently, he performed his PhD studies (2002-2006) in Prof. Kiefhaber’s lab at the Biozentrum, where he investigated the dynamics of synthetic polypeptides and protein secondary structure elements using ultrafast time-resolved spectroscopy.

In 2007 he joined the laboratory of Prof. Tom W Muir at the Rockefeller University, New York, and later Princeton University, New Jersey. There, he studied the folding behavior of chromatin fibers as well as the stability of nucleosome particles, depending on histone post-translational modifications.

In 2012, Beat Fierz was appointed Tenure Track Assistant Professor for the newly created Chaire Fondation Sandoz en chimie biophysique des macromolécules. In 2019, he was promoted to Associate Professor at ISIC.