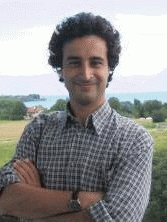 Paolo De Los Rios earned his master in Electronic Engineering at the Turin Institute of Technology (Politecnico di Torino) in May 1993.
In November 1993 he moved to Trieste, Italy, to enter the PhD program in Theoretical Condensed Matter Theory at the International School for Advanced Studies (SISSA/ISAS) where he obtained the PhD degree in October 1996 for his work on the statistical physics of disordered systems.
After a one year postdoc at the Max-Planck Institute for the Physics of Complex Systems in Dresden, Germany, in November 1997 he moved to the University of Fribourg, Switzerland, to join the group of Prof. Yi-Cheng Zhang. There he has worked on various applications of statistical physics to complex systems.
In September 2000 he has been appointed Assistant Professor in Statistical Physics of Living Matter and Complex Systems at the Institute of Theoretical Physics of the University of Lausanne, Switzerland.
Since April 2010 he is Associate Professor at the Institute of Theoretical Physics of the Ecole Polytechnique Fédérale de Lausanne (EPFL), Switzerland.