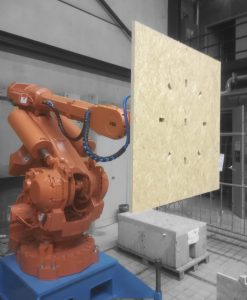 With the urge of building a more sustainable environment, timber construction is becoming more and more popular nowadays. The structural properties of wood are better and better understood and a wide variety of engineered wood product can now be used instead of concrete or steel. If most of timber structures still have metallic connectors, digital fabrication now allows the making of complex wooden joints at cheaper cost. However, the assembling process remains a heavy manual work. Using robots to assemble these elements could reduce the arduousness as well as the cost of timber construction. The aim of the research is to develop an efficient workflow for integrally attached timber plate structures from 3D modeling to robotic assembly.

The modelling part consist in three steps. First, to geometrically define what are plate elements and to ensure the conversion from general B-rep modelling to plate-like element. Second, to analyze adjacencies and the topologic connections inside a set of plates. Third, to generate joints depending of the topology using a parametric algorithm. Plates elements with integral mechanical attachment can then be analyzed using Finite Element Method or Macro Modeling Technique, where only unidimensional elements are used. Once the structural optimization loop completed and the design fixed, the plates are fabricated using a 4.5 axis CNC machine.

The digital fabrication process for timber panels is already well mastered by the industrial sector. The proposed workflow will integrate the existing knowledge by developing the links between design, fabrication and assembly. On the other hand, the robotic assembly of platelike elements is a new challenge which can also be divided into three major steps. First, the automation of the assembly sequence depending on the insertion vectors of the joints. Second, the generation of the robot trajectory thanks to pathfinding algorithms and the conversion to rotational movements for the robot. Third, the development of a set of new tools for the insertion of wood-wood connections. The experimental activities will notably focus on adapting the robotic insertion force as well as enhancing the geometry of the joint in order to overcome the friction forces. The final goal is to be able to assemble multiple connectors at the same time with the robotic arm. 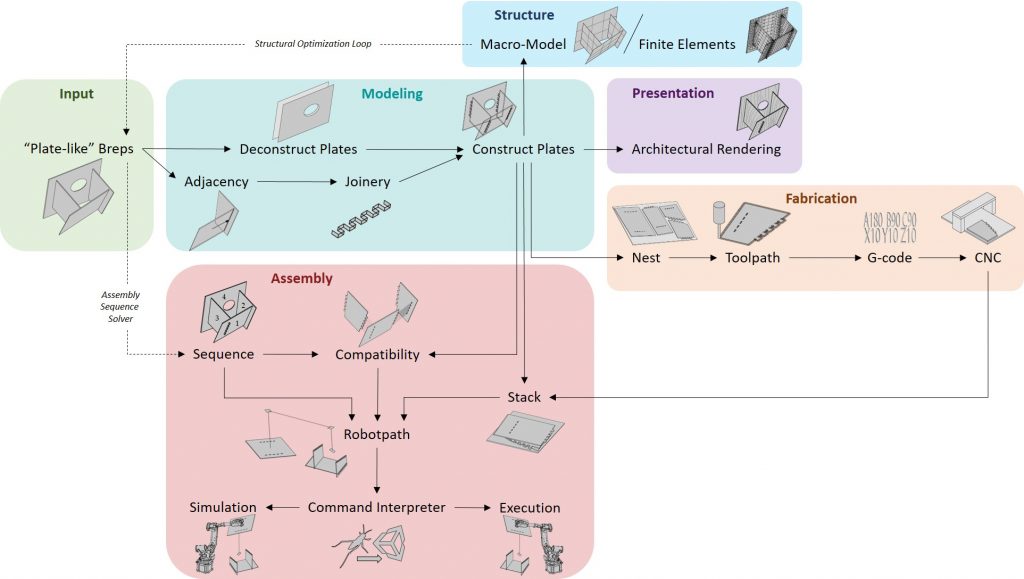