The musical preparation of the orchestra is carried out by the Konzertmeister-in, who is appointed for each programme by the commitee. 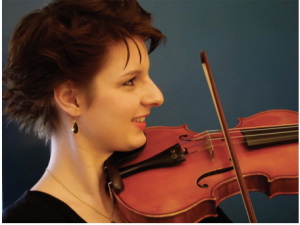 Angelina Zurzolo fell in love with the violin as a child and has devoted her life to it. Having received her baccalaureate and DEM at the CRR de Bourgogne, she continued to perfect her skills under the guidance of Pierre-Olivier Queyras and Sergey Ostrovsky, with whom she completed her master’s degree in music education at the HEMU.