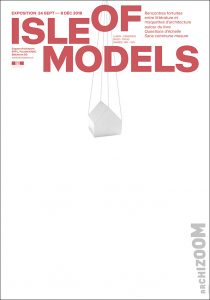 During the time of the next semester exhibition, Archizoom will be an archipelago hosting a large selection of models made in our studios. What are the sequential roles of the model in the project process? Is it a tool of control, transition, promotion? Is it an object in itself? How do changes in scale occur? What about the dialectic of big and small in the era of big data, BIM and all-digital? These are some of the sub-texts of this focus on ordres de grandeur.

The publication of Questions d’échelle (Nadja Maillard, Actes Sud, 2018), serves as a pre-text for the event, operating as a collection of texts gathered around the theme and some of which will be put in relation with the objects on display. We hope that these fortuitous encounters between literary quotations and models will generate unexpected reflections on the splendours and miseries of the total control of space and time that the model and miniaturization allow. “Without doubt the philosophers are right in saying that nothing is big or small except by comparison”. This sentence, that Swift puts in Gulliver’s mouth, is certainly the invisible core around which the exhibition will be curated, intending to organize its objects between the 1: 1 scale and that of the territory.