With approximately 10 to 15% of the world’s energy being expended on separations alone and the alarming rate at which atmospheric CO2 levels are rising, the development of new materials for energetically favorable gas separations is essential and will offer a large payoff from an environmental and economic perspective. The chosen approach to these problems within the LFIM is through the synthesis and characterization of porous crystalline materials, such as  metal-organic frameworks (MOFs). This relatively new class of porous materials, which have quickly moved to the forefront of science due to their application in a number of energetically important areas, consist of metal-ions or metal-ion clusters as nodes (also known as secondary building unites – SBU) that are linked together by organic ligands. After solvent removal many MOFs exhibit high densities of nanosized channels that lead to unprecedented internal surface areas allowing the adsorption of large quantities of guest species. The structural versatility of MOFs offers unmatched opportunities to achieve optimal efficiencies in many environmentally relevant applications.

The initial focus of the LFIM is on assessing several aspects of these nanoporous materials including small molecule adsorption/separation and their conversion into other value-added chemicals. The ultimate goal of the group is to contribute knowledge towards solving globally important problems, in particular those related to the reduction of CO2 emissions. The LFIM is housed within the new chemistry campus, EPFL-ISIC-Valais, located in Sion, Switzerland. The new lab in Sion is unique in that it has several research groups that are scientifically diverse, but share common missions in energy-related research such as carbon dioxide capture and utilization. 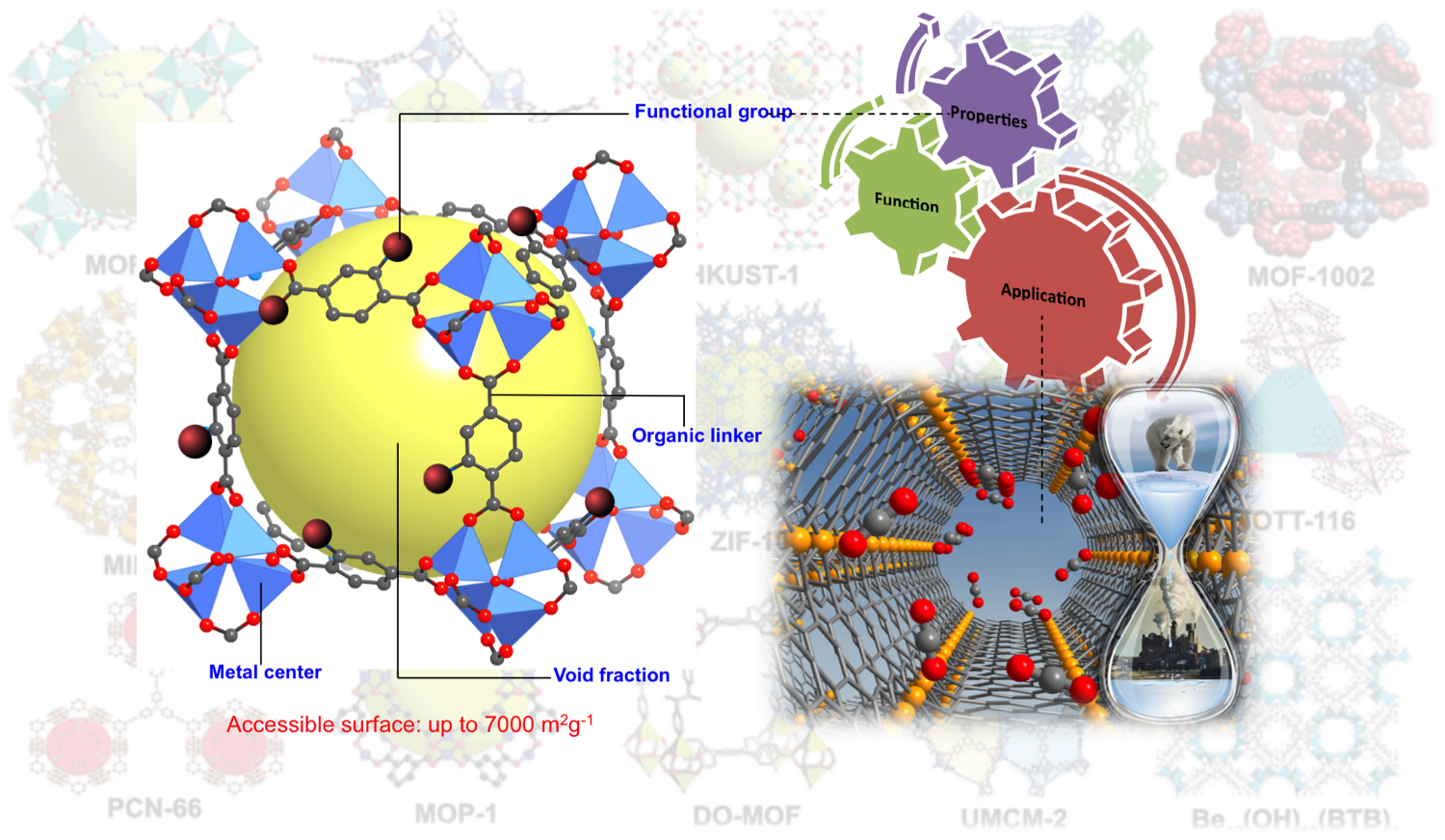 Ball and stick model of a MOF, known as MOF-5 or Zn4O(1,4-benezendicarboxylate)3, which is constructed by metal ion clusters interlinked by organic ligands. Through judicious selection of the MOF building blocks, one can easily tune thier structures and hence properties. For instance, using this modular approach, frameworks that selectively bind guest molecules and in unprecedented quantities are desinged. These properties make MOFs of strong interest in applications related to storage, separation, sensing, and catalysis. The MOF image on the right shows a zoomed in view of CO2 bound to open Fe(II) sites in a framework known as Fe2(dobdc) or Fe-MOF-74. The location and orientation of CO2 was determined by neutron diffraction.

The molecular nature of the organic ligands within MOFs induces structural versatility and modularity that has created a surge towards the discovery of new frameworks. However, difficulty in controlling in-situ formation of SBUs is a matter that is not yet well addressed. As such, currently these frameworks are often discovered through time intensive exploratory methods rather than designed using fundamental knowledge and control of crystallization processes. This difficulty has led to a bottleneck in the field, as materials synthesis cannot keep pace with computational efforts aimed at structure and property prediction. Understanding how to control the synthesis of MOFs using predefined building blocks can i) significantly reduce the structural degrees of freedom allowing easier prediction of structures and corresponding properties, ii) facilitate the synthesis of new classes of hybrid materials with highly desirable catalytic, gas storage/separation, and optical properties, and iii) provide a means to create more chemically complex materials. Given this, the LFIM is prefabricating both ligands and metal-containing SBUs and studying how varying reaction conditions influence crystallization of MOFs. We use a variety of chracterization techniques to monitor the building blocks in solution and also their crystallization process. This knowledge can additionally be used to manipulate the size, shape and quality of crystals, which is necesary for their eventual implementation into devices and separation membranes.

For MOF synthesis, (right) metal-containing SBUs and linkers with a variety of connectivities and functionality are combined to form targeted frameworks. Once synthetic procedures for the appropriate MOF are identified, they can be altered to (middle) control the size and shape of crystals for their eventual incorporation into (right) separation memebranes. It is important to understand how crystallization conditions influence performance.

Since the 1970’s, global anthropogenic CO2 emissions have increased by 70%, most of which is directly related to the combustion of carbon-based fossil fuels that to date supply approximately 80% of global energy. The environmental impact of high atmospheric CO2 levels have sparked ever growing interest in the mitigation of current CO2 emissions through carbon capture and sequestration (CCS), a task that has been constrained by the lack of an adequate gas separation technology. While CO2 capture from air is not very practical, that of large point sources, such as coal-fired power plants, could be realized. To date, these sources account for more than 40% of global CO2 emissions. The most mature capture technology is based on liquid-amine scrubbers. However, their wide implementation on an industrial scale has not been possible due to the massive energy requirement for regeneration. It is projected that the use of solid adsorbents could significantly reduce this parasitic energy loss associated with carbon capture and several other industrially relevant processes. Given this, after the preparation of MOFs with targeted structural features, the LFIM works to screen these materials for a variety of industrially related separations. The LFIM is also interested in engineering reactive sites onto the internal surface of MOFs that might allow the selective adsorption and subsequent conversion of a variety of small molecules like CO2. 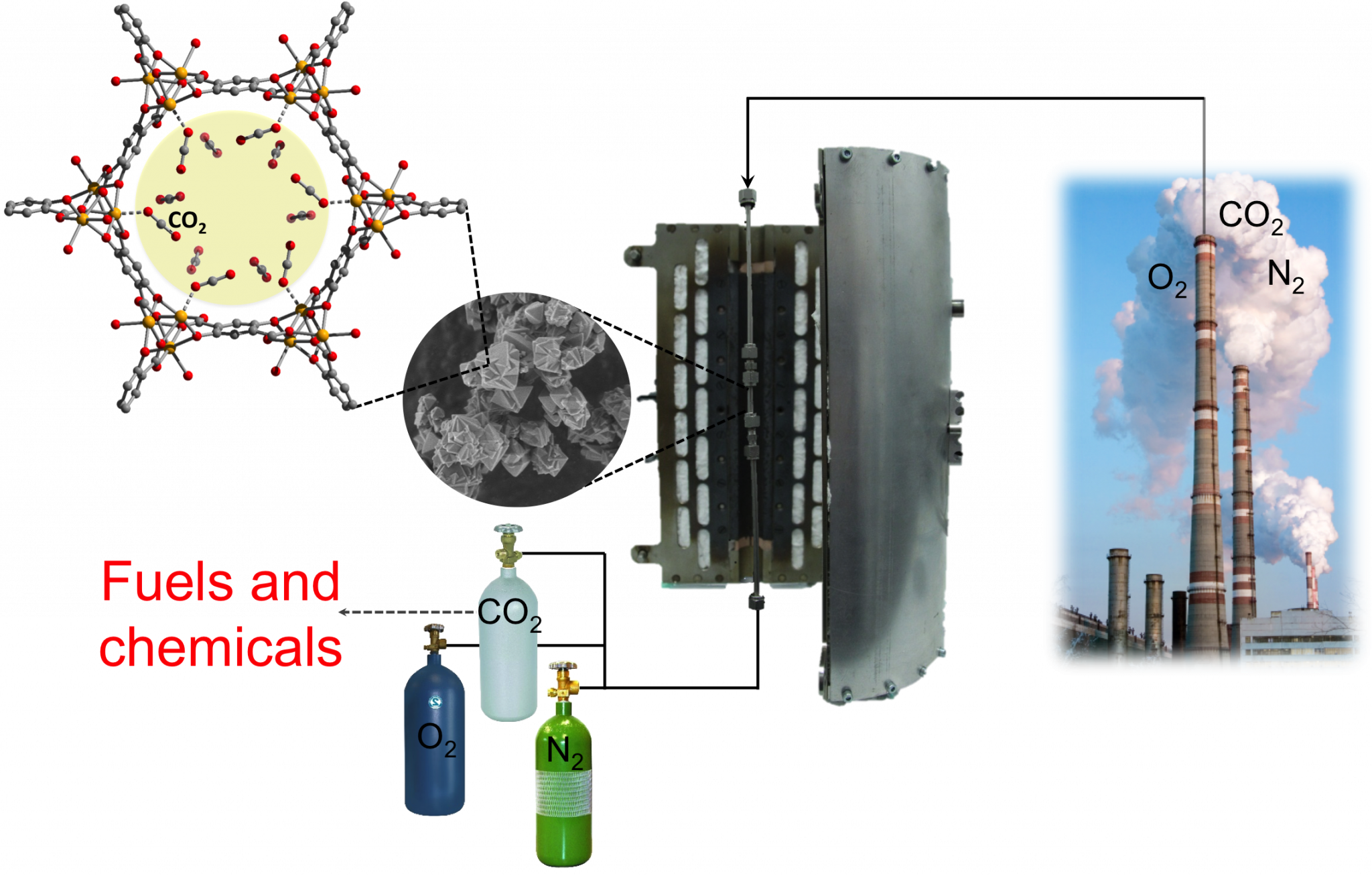 MOFs shown to exibit interesting single component adsorption properties, as in the case of MOF-74 (left), which shows extremely high CO2 adsorption at very low partial pressures, are packed into a column (middle) and their separation ability is studied at varying temperature and in a variety of gas mixtures, conditions that are relevant to industrial gas separations.

In order to understand fully how structure dictates function we couple standard adsorption measurements, both single and multicomponent, with in-situ diffraction and spectroscopic characterization. The latter provides molecular level insight into what structural features give rise to enhanced or diminished properties, knowledge that is necessary to design new frameworks or chemically tune existing frameworks for specified functions.