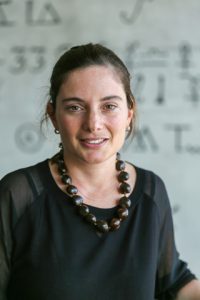 The research of Clémence Corminboeuf focuses on electronic structure theory in the area of method development and conceptual work applied to the field of homogeneous catalysis and organic electronics. Her group has contributed to the establishment of quantum chemical approaches and is involved in injecting quantum chemical expertise into machine learning models and reciprocally.

Clémence Corminboeuf co-authored more than 200 publications and was the awardee of the Sandoz Family Foundation, which supported her first four years of independent research activities at the EPFL. She received her B.S. and M.S. degrees in chemistry from the University of Geneva (Switzerland).

She completed her master thesis in computational chemistry at the Steacie Institute for Molecular Sciences (Canadian NRC, Ottawa) and obtained her PhD in computational/theoretical chemistry conducting research at both University of Geneva and TU-Dresden. In 2005, she became a Swiss NSF post-doctoral fellow at New York University working with the groups of Prof. Yingkai Zhang and Mark E. Tuckerman. In 2006, she joined the group of Prof. Paul von Ragué Schleyer at the University of Georgia (Athens, USA). She was appointed tenure track assistant professor at the EPFL in 2007 and promoted associate and full professor in 2014 and 2019 respectively. In 2010, she received the silver medal at the European Young Chemist Award. She was awarded two ERC grants (starting in 2012 and consolidator in 2018), received the Werner Prize of the Swiss Chemical Society in 2014, the Theoretical Chemistry Award from the ACS Physical Chemistry Division in 2018 and the Prix Jaubert 2020 from the University of Geneva. In 2021, she received the Heilbronner-Huckel Lecture Award from the Swiss and German chemical society and will give the 2022 Per-Olov Löwdin (Uppsala)  and Almlöf–Gropen (Oslo/Tromso) lectures.