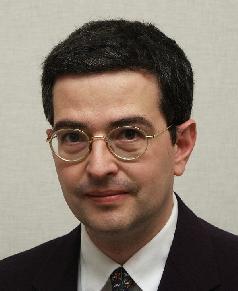 Alfredo Pasquarello studied physics at the Scuola Normale Superiore of Pisa and at the University of Pisa, obtaining their respective degrees in 1986.
He obtained a doctoral degree at the EPFL in 1991 with a thesis on Multiphoton Transitions in Solids. Then, he moved to Bell Laboratories at Murray Hill (New Jersey), where he carried out postdoctoral research on the magnetic properties of carbon fullerenes.
In 1993, he joined the Institute for Numerical Research in the Physics of Materials (IRRMA), where his activity involved first-principles simulation methods.
In 1998, he was awarded the EPFL Latsis Prize for his research work on disordered silica materials. Succeeding in grant programs of the Swiss National Science Foundation, he then set up his own research group at IRRMA.
In July 2003, he was appointed Professor in Theoretical Condensed Matter Physics at EPFL. Currently, he leads the Chair of Atomic Scale Simulation.

Interface structure between silicon and its oxide by first-principles molecular dynamics, A. Pasquarello, M. S. Hybertsen, and R. Car, Nature 396, 58 (1998).

Full list of publications from infoscience and from ResearcherID.