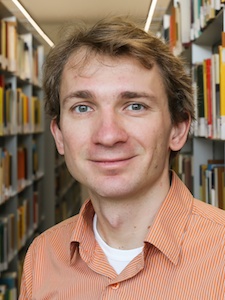 Prof. Oleg Yazyev was born in Simferopol, Crimean peninsula. He obtained his degree in chemistry from Moscow State University in 2003 and then joined Ecole Polytechnique Fédérale de Lausanne (EPFL) completing his Ph.D. thesis in 2007. He spent the next two years as a postdoctoral fellow at the Institute of Theoretical Physics (ITP) and the Institute for Numerical Research in the Physics of Materials (IRRMA) of the same institution. In 2009-2011 he was a postdoctoral fellow at the Department of Physics of the University of California, Berkeley, and the Lawrence Berkeley National Laboratory. In September 2011 he started an independent research group supported by the Swiss National Science Foundation professorship grant. In 2012 he was awarded an ERC Starting grant. His current research focuses on the theoretical and computational physics of two-dimensional and topological materials with a strong emphasis on their prospective technological applications.