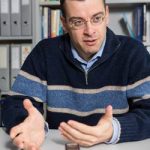 Pietro Gambardella, the newly appointed Full Professor of Magnetism and Interface Physics at ETH Zurich, did not want to be a scientist. It was the implicit challenge of a first year physics professor who taunted that less than a quarter of the assembled students would pass the class that settled the question.“I heard this and thought ‘well, I’ll show you,'” Gambardella said. And he did.

Gambardella went on to graduate with a physics degree from the University of Genoa in 1996 before completing his PhD at EPFL on the growth of nanowires using molecular beam epitaxy, a method of depositing ultrathin crystalline materials. After a stay as a visiting scientist at the Max Planck Institute for Solid State Research in Stuttgart, Gambardella returned to EPFL as a research associate.

By this time, he was most interested in the structural, electronic and magnetic properties of nanostructures and on what can be done with them. Magnetic properties, for instance, depend heavily on the size of the material, especially as it approaches the nanoscale, as well as on the shape—a material’s properties vary if it is in the form of a wire, film or a 3D object, for instance.

“What hooked me on this subject was the interface between physics and materials science,” he said. “You have a strict interplay between structures—how you make materials and grow them—and function. You can modify a material’s electronic properties as well as its chemistry, and then you have a bit of everything.”

This focus led him in 2006 to the Catalan Institute of Nanotechnology in Barcelona, which was just being set up. He was head of the Atomic Manipulation and Spectroscopy Group, and also an associate professor at the Autonomous University of Barcelona. The experience of starting something new and being able to contribute from the very beginning put him in a good position for his current job at ETH Zurich—he is again building up a lab from scratch. Though there are nuisances involved, there is also a significant advantage to his new job.

“I have a lot of academic freedom and the resources to put ideas into being,” he said. “I think that’s the main reason people work in places like this—there are no real boundaries other than those you set yourself.”

Gambardella’s work now focuses on the synthesis and characterisation of magnetic systems with novel structural and electronic properties. He is particularly interested in how the interplay between structure, bonding and size effects determine their electrical properties and in controlling the spin, or magnetic orientation, of the materials. To investigate this, he will again use molecular beam epitaxy and sputter deposition techniques to make materials and then study them with an array of complementary techniques including synchrotron radiation spectroscopy, scanning probe microscopy and magnetotransport measurements.

Potential applications of spin manipulation in nanostructured materials in particular include the replacement of external magnetic fields to control magnetisation and the flow of electric charge in small systems. This use of local electric fields or current rather than external coils to write data on computer memory, for example, would provide advantages in terms of the capabilities, speed, miniaturization and energy consumption of such devices.

Another area of research involves the development of organic magnets. Few organic materials act as magnets at room temperature. It may be possible though to tune the magnetic interactions in molecular systems, potentially resulting in organic magnets that are less expensive to make than inorganic magnets and which have appealing electrical or mechanical properties. Ideally, research will also uncover some new, unexpected phenomenon, Gambardella said.

“The dream of a scientist in my position is to discover something fundamentally new, but also useful for some application,” he said. “I think there are few of these moments where you can say this really happens on an important scale in the lifetime of a scientist.”