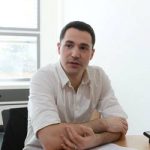 Fabien Sorin, EPFL’s New Tenure Track Assistant Professor of Materials Science, says the best thing about his field is that materials are and will remain at the heart of scientific and technological challenges. Highly multidisciplinary, it incorporates sciences ranging from physics to chemistry. This allows his work to have far-reaching implications in different areas; it also means that it often makes sense to seek the expertise of others.

So while many people take the first week of a new job to settle into their office, meet their colleagues or figure out the coffee machine, Sorin used the five days to kick off joint projects with academic groups in two completely different fields.

“I’ve always valued collaboration because I’m in a multidisciplinary field and can’t be a specialist everywhere,” he said. “Collaboration makes my projects advance much faster, and I can help others with my own expertise.”

Sorin, who joined EPFL on March 1, develops new photonic and fibre materials as well as innovative processes that allow for unique tailoring of structures and properties on length scales spanning from the nanometre to the kilometre. He first studied physics at the Ecole Polytechnique in Palaiseau, France, before finishing a PhD and post-doc at Massachusetts Institute of Technology’s Department of Materials Science and Engineering. His experience there, which included watching advisor Yoel Fink translate fundamental research into optical fibres for non-invasive surgery and an associated start-up, led Sorin into industry. He joined St. Gobain, a French maker of building materials, in 2011.

“At both MIT and St. Gobain I was always at the frontier between fundamental research and application and that’s really where I like to be,” he said. “It’s about developing a fundamental understanding of phenomena and advancing knowledge of science, but at the same time being able to transfer it and have an impact on society.”

Sorin sees many practical applications for his work. Sophisticated devices integrated into thin and flexible fibres are well suited, for instance, to matching the size and shape of structures of the body. Such wires could fit into pores or veins and be used to burn out cancer cells or in many other applications. Another potential use is in energy harvesting. It is now very difficult to manufacture devices that require nanostructures to be efficient on a large scale. This is a big problem for photovoltaics, for example. Fibre processing is low cost and simple, and involves heating a bulk object and pulling on it to transform volume into surface.

“If you can integrate the kind of functionality into a multi-material fibre that enables you to harness different forms of energy then you have a way of making simple, flexible, large scale and potentially low-cost energy harvesting devices,” he said.

Other potential applications include use in smart buildings to make them more energy efficient and in smart fabrics that might allow us to charge our mobiles phone while hiking in the mountains, for example.

“Discovering some fundamentally new aspect that leads to a practical application in a reasonable timeframe is something I’d like to achieve,” he said.
As excited as he is about these future applications and working with industry to achieve them, Sorin nonetheless chose to return to academia because he missed more fundamental research—and students.

They are not only key to ensuring the future success of materials science, they also provide a certain job satisfaction. Sorin cites the case of two students he mentored at MIT. Both master’s students had decided to go into strategy and finance after graduation but still needed fulfil the requirements of their degree with four-month internships, which they did with Sorin. After the experience, they both decided to stay in materials science. One will start his PhD with Sorin in May.

“This kind of influence—that is, having students enjoy the work and stick to science—is something that’s very gratifying to me.”