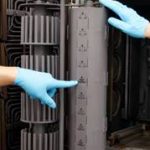 CCMX’s first Materials Challenge, the Coating Competence Center for Sputter Deposition by HiPIMS, has attracted additional industrial partners before even opening its doors.

The Center, inaugurated on 7 April, 2016 at Empa’s campus in Dübendorf, is the only one in Switzerland to other high-power impulse magnetron sputtering with Oerlikon Balzers’ Ingenia Sp3 coater. The 3000 kilogram machine, which produces thin films based on an advanced type of magnetron sputtering, allows for the deposition of dense coatings onto substrates with temperatures as low as 200°Celsius.

It features a wider range of power density compared to standard HiPIMS, independent adjustment of pulse duration and power level, pulse length beyond 100 msec, ultra-fast arc detection and high process stability. Put this all together, and you have an optimal instrument for deposition at both industrial and research and development scales.

“We can now develop new deposition processes with the reliability and reproducibility of industrial conditions,” said Jörg Patscheider, head of the Thin Films and Coatings group at Empa.

This helps explain the appeal to industry. CCMX’s partners at the Coating Competence Center were introduced to a new partner, SmartFish, at the poster session of CCMX’s 2014 annual meeting in Bern. The company has already received funding for a joint project that involves preparing piezoelectric coatings for applications in the mechanical watch market. The center is also discussing projects with companies in the Medtech field, which have expressed interest in, among other subjects, coating three-dimensionally structured polymeric implants with titanium. The researchers have run preliminary experiments producing promising first results.

CCMX-sponsored HiPIMS activities will also be used in another CTI R&D project with Oerlikon Surface Solutions AG to develop hard amorphous carbon coatings. The machine’s capabilities will be used to provide coatings with high hardness, fully dense material as well as very flat surfaces.
The various practical experiments being run on the Ingenia will be supported by numerical simulation of coatings’ properties to develop suggestions on how they could be tailored for optimal properties such as residual stress states. The work will start in 2016. Another potential project involves adapting already established processes for making siliconcarbide based coatings to protect high precision tools for glass moulding of miniature lenses.

Education is an essential element of each Materials Challenge. In 2015, the Coating Competence Center team arranged a two-day short course presented by Prof. Joe Greene from the University of Illinois, Linköping University and Taiwan Technological University on Thin Film Nucleation and Sputter deposition. Thirty-four participants, including 14 from industry, took the course. Future projects will include PhD students working with the Ingenia coater.

Empa will also other high precision printing, additive manufacturing as well as UHV sputter deposition of conducting oxides in addition to the HiPIMS activities.