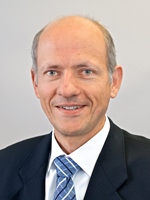 Oliver Kröcher was born in Germany and received his Diploma in chemistry from the University of Wurzburg in 1993. He got his PhD at the Department of Chemical Engineering and Industrial Chemistry of the ETH Zurich in 1997. After that, he worked a couple of years for Degussa in Germany on catalytic processes for chemical production in different positions, before he returned to academia in 2001. He took over the Exhaust Gas Aftertreatment Group at the Paul Scherrer Institut (AG), working on catalysis for cleaning lean exhaust gases.

In 2010, he broadened the scope of the group to catalysis for energy conversion processes in general and integrated his group in the Bioenergy and Catalysis Laboratory at the Paul Scherrer Institut, which he leads in addition. In 2013, he became an adjunct professor at EPFL.

Oliver Kröcher received the Swiss Technology Award 2005 and the Special Prize of the ABB Schweiz AG for Saving Resources in 2005. He is member of the steering committee of the European Energy Research Alliance (EERA) Bioenergy and member of the extended energy commission a+ of the Swiss academies of arts and sciences.