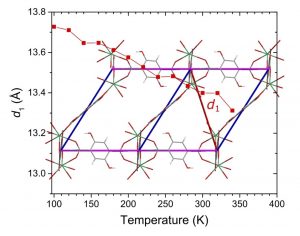 Abstract: A lanthanide-based metal–organic framework (MOF), named SION-2, displays strong and tuneable uniaxial negative thermal expansion (NTE). The coefficient of thermal expansion α1 reaches –153(6) MK–1 between 100 and 340 K, which is among the highest values reported to date for Ln-based MOFs. After heating to 380 K and subsequent cooling, the directionality and the magnitude of the effect change dramatically: the strong NTE effect is no longer observed along X1, while a much weaker NTE effect emerges in a perpendicular direction. Loss of non-coordinated N,N-dimethylformamide molecules together with the rectuction of the size of structural voids stands as a rationale behind this switch-over.