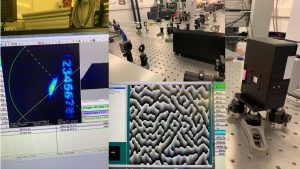 Advisors: Matthieu Simeoni (LCAV), Sepand Kashani (LCAV) and Julien Gateau (GALATEA, Microcity)
Contact: Matthieu Simeoni ([email protected])
Synopsis: Assess novel beamforming solutions for light waves using a spatial light modulator.
Levels: Bachelor, Master (, including Master thesis)
Sections: MT, IC, PH, EL
Description: Lasers are often used for carving materials in micro-scale manufacturing. State-of-the-art techniques based on focused laser beams proceed sequentially to print the pattern of interest through successive scans over the substrate. While simple to implement and providing relatively good spatial resolution, such strategies are wasteful both in terms of etching time and energy use.
An alternative strategy consists in beamforming coherent light sources together so as to create constructive radiation profiles that could etch the entire pattern in parallel. Recent works suggest  this approach is more energy and time efficient than the current scanning procedure, while potentially less prone to manufacturing artefacts. Beamforming is heavily leveraged for shaping radio and acoustic waves, but its application to light remains largely unexplored. This is partly due to the unavailability of programmable hardware capable of modulating multiple light sources.
Used intelligently, a spatial light modulator (SLM) could play such a role. However, SLMs can modulate the phase or amplitude of light waves, but not both simultaneously. LCAV has developed advanced beamforming methods that could adapt to such constraints.
The goal of this project is to verify this hypothesis in practice in collaboration with our partner lab GALATEA based in Microcity. The student will work with both labs to achieve this goal.
Deliverables: proof of concept; lab report with detailed experimental procedure and results; reproducible Python scripts for analysing the data.
Prerequisites: experience with a high level scripting language such as Python; previous experience in lab environments and a good knowledge of optics are a plus.
Type of Work: ~80% lab work (at Microcity Neuchâtel), ~20% programming.