Professor David Atienza is the recipient of two prestigious awards, the 2018 IEEE TCCPS Mid-Career Award, and the IEEE/ACM 2018 DAC under 40 Innovator Award. He officially received both prizes during the IEEE/ACM 2018 Design Automation Conference (DAC) in San Francisco.

Professor David Atienza, head of the Embedded Systems Laboratory at the EPFL School of Engineering has received two important awards in the field of electrical and computer engineering during the 55th IEEE/ACM 2018 Design Automation Conference (DAC) in San Francisco.

The IEEE TCCPS Mid-Career Award recognizes a mid-career researcher who has demonstrated “outstanding contributions to the field of cyber-physical system (CPS) and Internet-of-Things (IoT) in his/her career development”. The award selection committee placed particular attention on the scientific significance and impact of the research work led by the nominee.

Amongst other areas, Professor Atienza has been working on smart wearables, particularly for the medical domain. He has developed specialized multiprocessor designs and microprocessor controllers for electrocardiogram analysis, and a number of other health monitors. This kind of device aims to assist doctors in analyzing data remotely. (More information here)

The IEEE/ACM 2018 DAC under 40 innovator Award, rewards researchers of 40 years or younger in age who are “movers and shakers in the field of design and automation of electronics”.

The emphasis of this second award are specific contributions “such as commercial products, software or hardware systems, or specific algorithms or tools incorporated into other systems widely used by industry and academia.” Other metrics such as number of publications, patents and citations are not central for receiving this prize. Among other criteria, one important parameter was the “commercialization and/or wide adoption of the laureates’ contributions”. 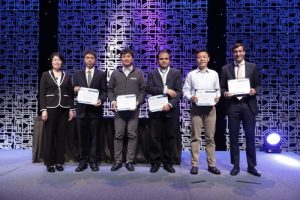 “These prizes are very important to me because they stress the excellence of our scientific work in the field of IoT, but even more importantly they confirm that recently developed technologies in electrical and computer engineering at EPFL have a strong impact on industry and its new products”, says David Atienza.