We are interested in how seemingly simple physical systems create unexpectedly complex patterns and dynamical behaviour. Examples range from complex laminar turbulent patterns in shear flows and the imperfection induced bucking of elastic shells to the deformation of droplets in microfluidic applications. We study these systems using several aspects of continuum mechanics and transport theory entwinded with dynamical systems methods and large computer simulations.

In the past decade, ideas from nonlinear dynamics have laid the foundation for a new approach to study turbulence. Advances in numerical simulation techniques have led to the discovery of exact equilibrium and traveling-wave solutions to the full nonlinear Navier-Stokes equations. Turbulence can be understood as a chaotic walk between these exact solutions, which represent (usually unstable) attractors in state space. 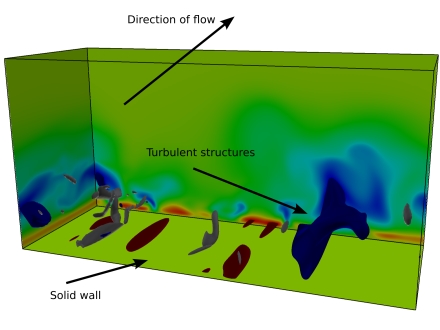 Flows can be either smooth and laminar or chaotic and turbulent, with a large impact on flow properties such as friction. But despite its technological relevance, the question of when and how a flow becomes turbulent cannot be answered under general circumstances. In our lab we investigate these questions with the aid of modern computers and methods from nonlinear dynamical systems, connecting chaos theory and turbulence. We study different systems, ranging from open boundary layer flows as shown in the figure on the (left) to closed systems such as pipe and plane Couette flow.

1.2. Drag Reduction Due to Polymers

It is well known that adding a tiny amount of long-chain polymers to a fluid can drastically reduce the friction drag. While this effect has been known since the 1940s and is very well documented, it is not completely understood. How do the polymers alter the flow? Why is there an upper limit to the drag reduction, irrespective of the type of polymers or their concentration? And can we achieve the same effect without adding polymers, which is sometimes not possible? We investigate these questions by means of numerical simulations in simple flow systems, trying to link properties of the polymeric flow to purely Newtonian liquids and looking at differences and similarities between the cases.

Natural and engineered structures ranging from egg shells to air- and spacecrafts are built from thin elastic shells. How much load can such a shell carry before it buckles and eventually collapses? This seemingly simple question has not been fully resolved even for the simplest cases such as a cylinder compressed in axial direction. Predictions based on linear theory fail to capture experiments indicating buckling to occur well before the unbuckled state looses stability. We investigate this problem using the same fully nonlinear dynamical systems concepts that revolutionized the description of transitional turbulence in recent years. Based on precision experiments in combination with numerical bifurcation analysis buckling is characterized in terms of a fully nonlinear instability. 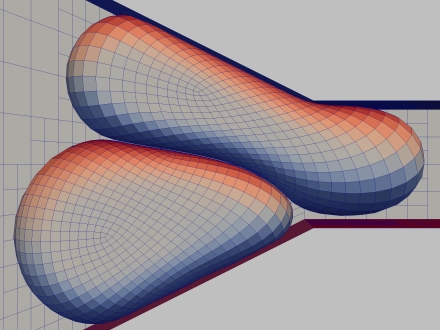 Interfacial effects such as surface tension dominate the flow dynamics of a fluid at small length scales. In the field of droplet microfluidics, which deals with the creation and manipulation of fluid droplets at these small length scales in the micrometer to millimeter range, one therefore needs a precise quantitative description of the physical and chemical processes that influence surface stresses, as well as the stresses’ effects on the droplet dynamics.

We study the dynamics of droplet interfaces numerically by performing 3D boundary-element simulations. Fluid flows as well as the elastic response of shells are described by high-dimensional fully nonlinear partial differential equations. These equations are solved numerically and the bifurcation structure of invariant solution is characterized. Taking advantage of state-of-the art high-performance compute clusters, we develop MPI-based parallel continuation and bifurcation analysis tools, capable of handling the several million coupled degrees of freedom required to represent solutions of the nonlinear PDEs. Many tools are based on the Channelflow library, others interface with the deal.II FEM framework.