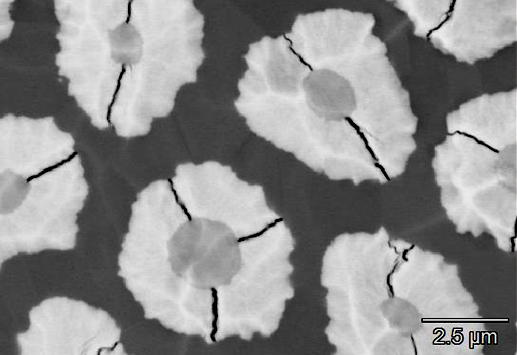 Electrons from the scanning beam are reflected, or “backscattered”, resulting from  quasi-elastic scattering by atoms in the sample. The extent of backscattering is effectively proportional to the average atomic number of the sample, with heavy elements reflecting more electrons than light elements. In consequence, backscattered-electron (BE) images contain compositional contrast that can be used to distinguish different phases. Backscattered-electrons are mostly reflected at low angles relative to the electron beam, and, unlike secondary electrons, are too high in energy to be attracted to a detector by applying a small voltage bias. Therefore, to capture the greatest BE yield, BE intensity is typically measured using a semi-conductor detector concentric to, and just below, the electron gun, and that subtends a relatively large solid angle. Unlike secondary-electrons, backscattered electrons primarily come from sub-surface interaction volumes that can measure 100s nanometres to > 1 micrometre in diameter, depending on beam energy and sample material. These length scales, rather than electron beam diameter, generally determine BE imaging resolution. The interaction volume can also mean that BE contrast may derive from a sub-surface phase not apparent in the SE image. BE detectors are often split radially in to sections (“quadrants”). While compositional contrast images are obtained by adding the signals from different quadrants, topographical contrast images can instead be made by subtracting the signal of one side from another.

Back to SEM techniques page