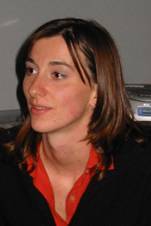 Dr. Elena Salvador received her degree in Electronic Engineering from the University of Trieste, Italy, in June 2000. From October 1999 to April 2000, she was an exchange student at the Swiss Federal Institute of Technology (EPFL). She did her diploma work at the Signal Processing Laboratory (LTS) developing a technique for the segmentation of shadows in color images. In May 2001, she received the “Marisa Bellisario Award”, assigned every year by the Fondazione Marisa Bellisario to three young women who achieve top marks in an Engineering degree in Electronics and Telecommunications. From September 2000 until October 2004, she was at the Signal Processing Institute (ITS) as a research assistant and Ph.D. student, working on image and video analysis. After her graduation, she joined the Artificial Vision and Real-Time Systems Laboratory at the University of Udine, Italy, as a Post-Doc Researcher. Since December 2007 she is a Patent Examiner in the field of Image and Video Processing at the European Patent Office in Munich.