Natural disasters can happen suddenly and may cause great damage in densely populated areas. In the case of an earthquake or a flood, the network infrastructure may get damaged, preventing survivors from calling for help and hampering cooperation between the survivors and search and rescue teams. 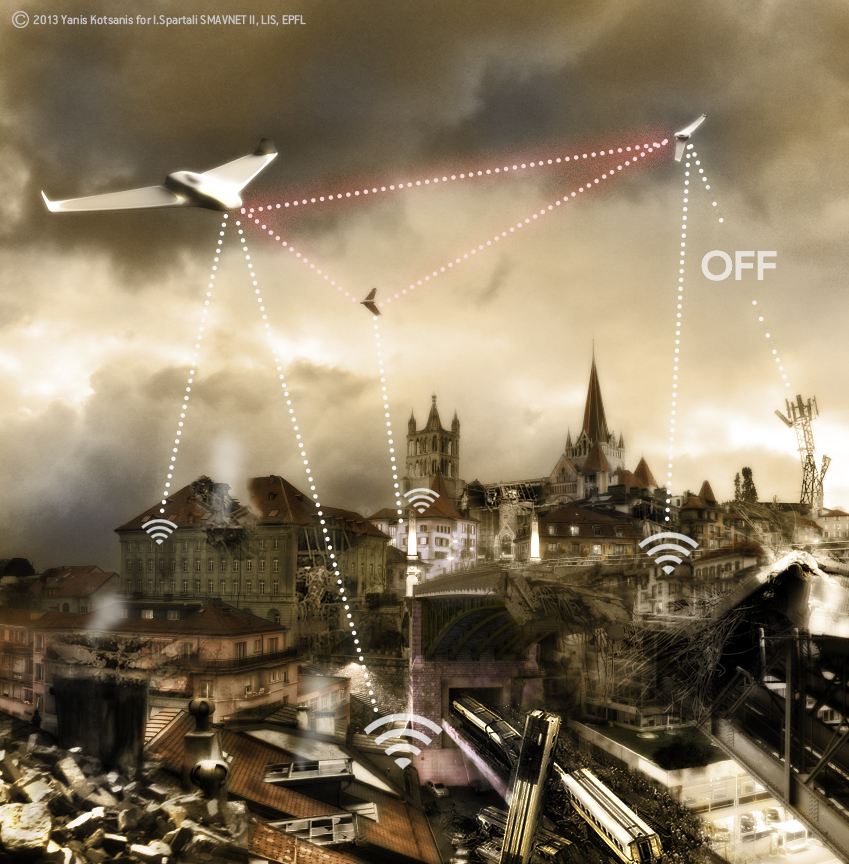 Flying robots are of interest for such applications because they are fast, can easily overcome rough terrain and have direct line-of-sight communication between themselves and with ground users.

The requirements of the suggested applications impose some desired characteristics on the flying platforms. Firstly, the platforms should have adequate autonomy to serve the task. Secondly, the platforms should be user friendly so that the set-up and operation of the swarm does not require special skills. Finally, the robots should be robust to disturbances and have sufficiently long flight times.

There are numerous flying platforms available today. When making a choice for swarming network applications, we consider the following constraints:
User-friendliness: No special skills should be required to deploy or operate the swarm.
Safety and robustness: Flying platforms should not pose a danger for ground users, and should be able to withstand falls.
Size: Small size allows for easy transportation and setup of the swarm.

Autonomy: Flight autonomy is crucial to the success of a swarming network mission.

To satisfy the above criteria and have a long flight time endurance, we decided to use the eBee (https://www.sensefly.com/drones/ebee.html). The eBee is a fixed wing flying platform of 600g, 1m wingspan, electrically powered, with a flight time up to 45min. We have connected a computer on module to run high-level controllers for swarming and add a wireless network capability, to the existing platform.

The LIS part of this project is to develop new algorithms for searching people on the ground and establish communication among them in a reliable and efficient way. We are inspired from what has been done so far in area coverage and in communication maintenance. We work towards finding the most suited algorithm to deal with both aspects at the same time. A complete simulation set-up (physics + controllers) has been set up so far allowing us to test our algorithms and get some statistics. We plan to run some outdoors experiments in the following weeks to check that the result we get in simulation were actually relevant.

We are collaborating with the LCM Laboratory. The LCM lab is responsible for developing new algorithms for the wireless network. Ideal case in a swarming network is one whe every single node should be connected to at least one other node in order to get a chain from every node to any other node. The main challenge of this part is to cope with the fast change of the network topology. This challenge arises from the high minimal speed (60km/h) of the fixed-wing flying platform and is further complicated by the fact that users on the ground are mobile. Finally, we need to ensure that the mission time of the swarm can exceed the flight time endurance. The LCM lab has demonstrated an improvement over the existing network algorithm by using the relative speed between robots to predict how the link between them should change before it breaks.