We propose an approach to detect flying objects such as UAVs and aircrafts when they occupy a small portion of the field of view, possibly moving against complex backgrounds, and are filmed by a camera that itself moves.

Solving such a difficult problem requires combining both appearance and motion cues. To this end we propose a regression-based approach to motion stabilization of local image patches that allows us to achieve effective classification on spatio-temporal image cubes and outperform state-of-the-art techniques.

As the problem is relatively new, we collected two challenging datasets for UAVs and Aircrafts, which can be used as benchmarks for flying objects detection and visionguided collision avoidance.

In order to be able to make use of temporal information and avoid bias coming from the variety of motions an aircraft could make, we propose a learning-based method to compensate for its motion. This aims to reduce the in-class variation of the data, used for training the detection framework. 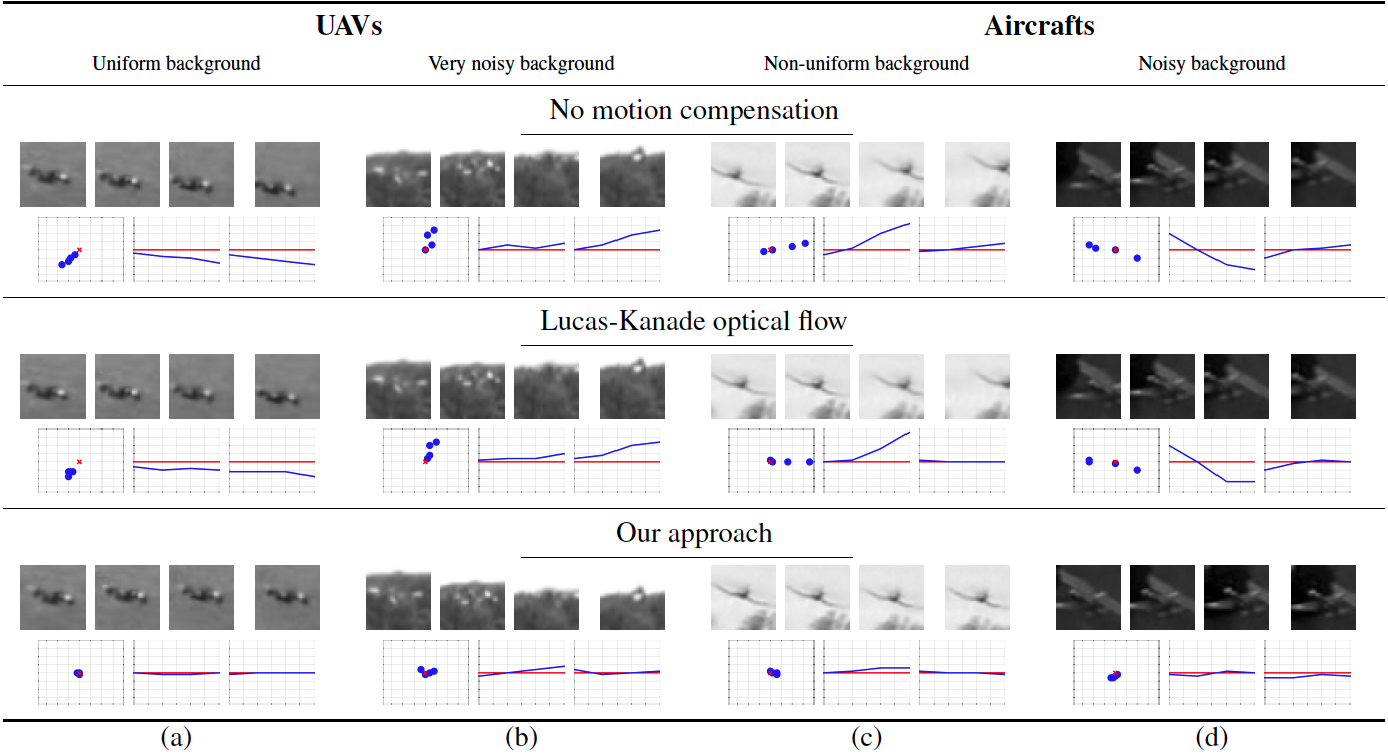 Compensation for the apparent motion of different flying objects inside the st-cube (sequence of patches) allows to decrease in-class variation of the data, used by the machine learning algorithms. For each st-cube, we also provide three graphs: The blue dots in the first graph indicate the locations of the center of the drone throughout the st-cube, the red cross indicates the patch center. The next two graphs plot the variations of the x  and y  coordinates of the center of the drone respectively, compared to the position of the center of the patch. We can see that our method keeps the drone close to the center even for complicated backgrounds and when the drone is barely recognizable as in the right column.

Detection results on the video from the UAV dataset

We can see that the appearance of the object changes a lot, base on various illumination changes and noise, coming from the background. Nevertheless, our approach is able to detect it in most cases.

Here we use CNN regressor for adjustment of both spatial position and scale of the aircraft, which leads to precise localization in 3D space. We can see that the algorithm allows to correctly estimate the size of the object in the most of the cases. This allows the whole framework to detect aircraft at broad variety of scales.

Please contact Artem Rozantsev, should you have any questions on how to use the code.