The Structural Engineering Platform and associated laboratories are interested in various forms of collaboration with industry, i.e. businesses, design offices, material suppliers, and fabricators, as long as they are in agreement with the EPFL policy.
This essentially means instituting conditions of fair competition with the private sector. Also, collaborations which, by their nature or the questions which they trigger, present a large interest within the framework of the scientific research are favoured. The EPFL Technology Transfert Office (TTO) is involved from the start as a partner for drafting, negotiating and approving research and service contracts.

The different types of contract are described here

Example 1: Strengthening of a railway bridge

The aim of this study is to test and validate the fatigue resistance of the proposed reinforcement for a railway bridge and to define the requirements for its realization.

SBB Lausanne and the Resilient Steel Structures Laboratory (RESSLab) collaborated to investigate the fatigue upgrading of typical cover plate joint connections in existing steel bridge girders through cover plate extension. The upgraded detail is created by removing the existing transverse end weld, then welding the extension to the existing cover plate with the underlying plate acting as backing. The extended cover plate should end in a zone of low stress variation. The fatigue resistance of this detail is investigated by means of scaled specimen and beam testing as well as a corroborating detailed finite-element parametric study. The results led to a new category of detail and related manufacturing requirements. This detail will be used to reinforce an existing SBB bridge in Zug region and is likely to be reused for other bridges in Switzerland. 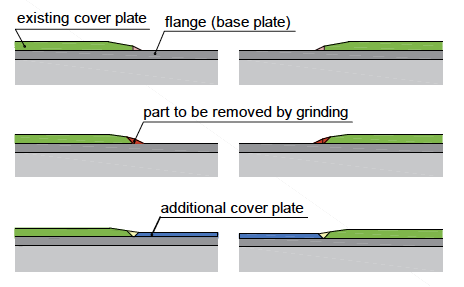 Concept for improving the transverse end weld detail by adding a cover plate that alleviates the stress concentration.

The aim of this expert investigation was: to participate in developing traffic load patterns, evaluate fatigue damage, and advise on specific detailing of the 3rd Bosporus bridge.