“The case for diversifying your mathematical toolbox”

Prof. Kathryn Hess Bellwald, head of the Laboratory for Topology and Neuroscience 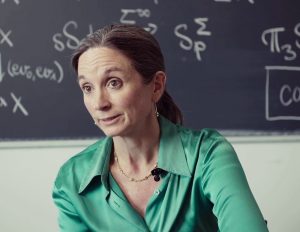 Certain fields of mathematics, such as dynamical systems and partial differential equations, have long provided tools employed by scientists and engineers to advance their research. More recently, the utility of other branches of mathematics, such as number theory in cryptography, graph theory in neuroscience, and (very recently) differential geometry in machine learning, has become increasingly clear.   There is great potential for further fruitful synergies between reputedly “pure” branches of mathematics and a wide range of fields in science and engineering.
To illustrate the power of less standard mathematical methods in science and engineering, I will describe the results of a long-standing collaboration with Lida Kanari of the Blue Brain Project, in which we applied methods of combinatorial topology to analyzing the morphologies of neurons and glial cells.  I will also briefly sketch the results of other rewarding collaborations with EPFL colleagues, in which topological methods provided interesting insights into problems in both the life sciences and material science.
Kathryn Hess Bellwald received her PhD from MIT in 1989 and held positions at the universities of Stockholm, Nice, and Toronto before moving to the EPFL.
Her research focuses on algebraic topology and its applications, primarily in the life sciences, but also in materials science.  She has published extensively on topics in pure algebraic topology including homotopy theory, operad theory, and algebraic K-theory. In her work in applied topology, she has elaborated methods based on topological data analysis for high-throughput screening of nanoporous crystalline materials, classification and synthesis of neuron morphologies, and classification of neuronal network dynamics.  She has also developed and applied innovative topological approaches to network theory, leading to a parameter-free mathematical framework relating the activity of a network of neurons to its underlying structure, both locally and globally.
In 2016 she was elected to Swiss Academy of Engineering Sciences and was named a fellow of the American Mathematical Society and a distinguished speaker of the European Mathematical Society in 2017.  In 2021 she gave an invited Public Lecture at the European Congress of Mathematicians.  She has won several teaching prizes at EPFL, including the Crédit Suisse teaching prize and the Polysphère d’Or.