The Collective Intelligence of Army Ants, and the Robots They Inspire 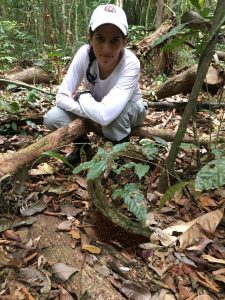 In nature, groups of thousands of individuals cooperate to create complex structure purely through local interactions — from cells that form complex organisms, to social insects like termites that build meter-high mounds and army ants that self-assemble entire nests, to the complex and mesmerizing motion of fish schools and bird flocks. What makes these systems so fascinating to scientists and engineers alike, is that even though each individual has limited ability, as a collective they achieve tremendous complexity.

What would it take to create our own artificial collectives of the scale and complexity that nature achieves? My lab investigates this question by using inspiration from biological collectives to create robotic systems, e.g. the Kilobot thousand robot swarm inspired by cells, and the Termes robots inspired by mound-building termites.

In this talk, I will discuss a recent project in my group – Eciton robotica – to create a self-assembling swarm of soft climbing robots inspired by the living architectures of army ants. Our work spans soft robotics, new theoretical models of self-organized self-assembly, and new field experiments in biology. Most critically, our work derives from the collective intelligence of engineers and scientists working together.

Radhika Nagpal is the Kavli Professor of Computer Science at Harvard University and a founding faculty member of the Wyss Institute for Biologically Inspired Engineering.

She received her SB and PhD from the Massachusetts Institute of Technology. At Harvard, she leads the Self-organizing Systems Research Group (SSR) and her research interests span computer science, robotics, and biology.

Nagpal is the co-founder of ROOT Robotics, an educational robotics company aimed at democratizing AI and robotics through early education; her lab’s Kilobots have been commercialized with over 8000 robots sold worldwide.

Nagpal is also the author of a Scientific American blog article on tenure-track life (“the Awesomest 7-year Postdoc”, 2013), and is dedicated to creating a diverse and inclusive culture in STEM and academia.