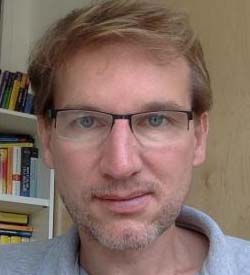 Sorting and ranking an array are fundamental routines in machine learning, used to compute rank-based statistics, cumulative distribution functions (CDFs), quantiles, or to select closest neighbors and labels. The sorting and ranking functions are however piecewise constant (the sorting permutation of a vector does not change if the entries of that vector are infinitesimally perturbed) and therefore have no gradient information to back-propagate.

In this talk, Prof. Vert will discuss different approaches to design differentiable sorting and ranking operators, using regularization or perturbation techniques, and highlight some applications in learning to rank or matrix factorization.

Jean-Philippe Vert has been a research scientist at Google Brain in Paris and adjunct researcher at PSL Mines ParisTech since 2018.

He graduated from Ecole Polytechnique (1995) and Corps des Mines (1998), and holds a MSs and a PhD in mathematics from Paris 6 University prepared at Ecole normale supérieure in Paris (2001).

After a postdoc in computational biology at Kyoto University, he joined Ecole des Mines de Paris (MINES ParisTech) as a researcher in 2003. There he was the founding director of the Centre for Computational Biology from 2006 to 2018, team leader at Institut Curie on computational biology of cancer (2008-2018), visiting scholar at UC Berkeley (2015-2016), and professor at the department of mathematics of Ecole normale supérieure in Paris (2016-2018).

His research interest concerns the development of statistical and machine learning methods, particularly to model complex, high-dimensional and structured data, with an application focus on computational biology, genomics and precision medicine. His recent contributions include new methods to embed structured data such as strings, graphs or permutations to vector spaces, regularization techniques to learn from limited amounts of data, and computationally efficient techniques for pattern detection and feature selection.

He is also working on several medical applications in cancer research, including quantifying and modeling cancer heterogeneity, predicting response to therapy, and modeling the genome and epigenome of cancer cells at the single-cell level.