Vortices generated in highly unsteady conditions have the potential to greatly enhance the lift generation. As a consequence of this potential benefit, biologically inspired mechanisms, such as flapping wing flight, have greatly influenced Micro-scale Aerial Vehicles’ recent technology. The goal of this semester project is to experimentally investigate the formation and growth of vortices in unsteady conditions, to get a deeper understanding of the vorticity accumulation phenomenon. Controlled laboratory experiments including high temporally and spatially resolved particle image velocimetry (PIV) are conducted. They allow to visualize the velocity field generated by a thin two-dimensional rectangular flat plate that is rotated 180° about its span-wise axis in a quiescent fluid. The rotation of the flat plate gives rise to the formation of vortices fed through shear layers separating at both edges of the plate. By varying the pitching rate of the plate, the temporal evolution of the flow topology and vortex growth characteristics are investigated. Qualitative descriptions of the flow development and quantitative estimations of the effect of pitching rate variations are provided. It is found that during the 180° clockwise rotation of the flat plate, five counterclockwise rotating vortices are formed at each tip of the plate. A total of five pairs of vortices are always shed by the end of the pitching motion, regardless the rotational velocity applied to the wing. Results show that the strength of the individual vortices is directly dictated by the wing geometry and its rotational velocity. A closer investigation of the characteristics of the starting and the stopping vortices is conducted. Referring to theoretical viscous vortex models, the tangential velocity profile is investigated for both vortices, at each rotational speed of the flat plate. The maximum tangential velocity increases linearly with the rotational speed applied to the wing.
While the current project is conducted using Eulerian vortex detection methods, an interesting extension to the present study would be to apply innovative Lagrangian methods to the experimental results obtained during this semester. Lagrangian data analysis is a popular method for tracking vortices in time and analyzing vortex dynamics. A publication, entitled “Lagrangian analysis of the formation of vortices on a rotating flat plate”, will be presented at the International Symposium on the Applications of Laser and Imaging Techniques to Fluid Dynamics of Lisbon, by my supervisor and PhD candidate, Diego Francescangeli. 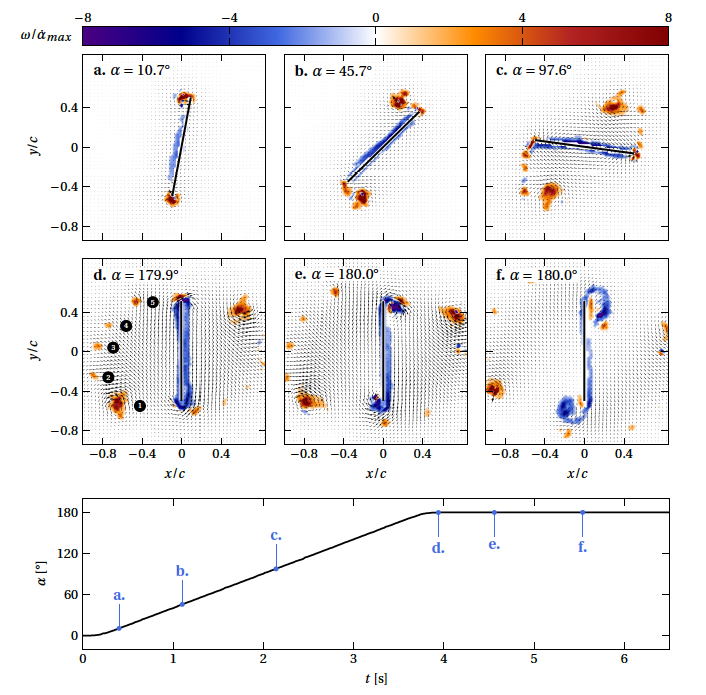