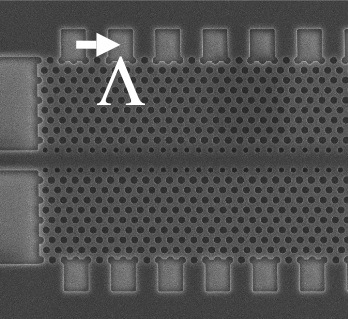 Photonic crystals are defined by a periodic modulation of the dielectric function on the wavelength scale in electromagnetic structures. They have provided a driving force for a tremendous increase of activity in optics research since their modern rediscovery by E. Yablonovitch and S. John in the early 1980. Photonic crystals exhibit many interesting features for basic science applications such as enhancement or inhibition of spontaneous emission and for applied science as well like nanophotonics and integrated optics due to their ability to control both light propagation and localization at the wavelength scale.
Photonic crystals can be derived in a very large variety of structures, material and technology. We are mainly working on bi-dimensional structures etching on III-V or Si planar waveguides. We focus mainly on light propagation in the slow light regime and disorder effects, high-Q cavities, hollow photonic crystals structures with a large field overlap with the environment and extension to visible range material systems. 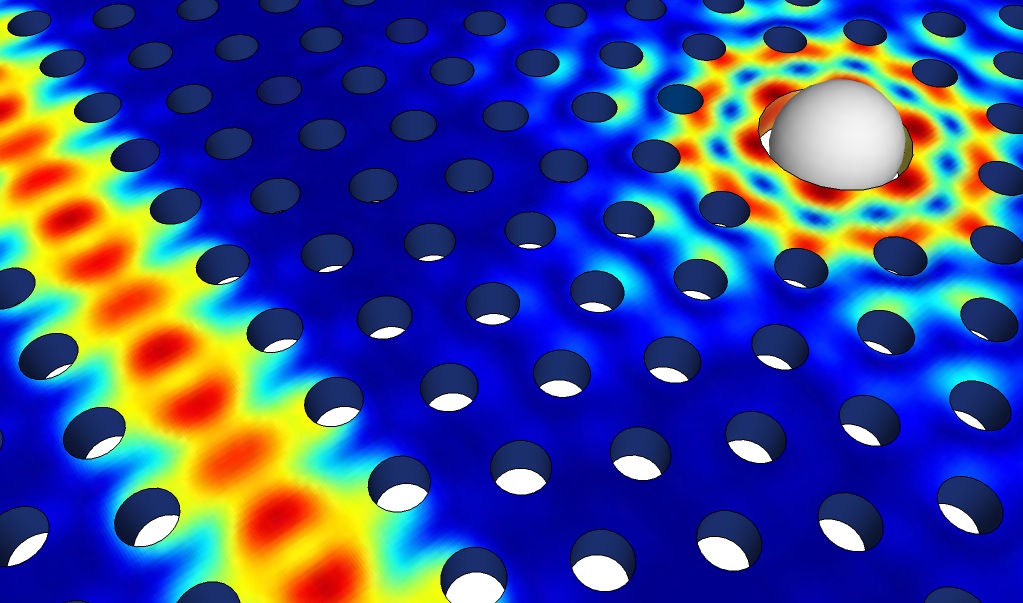 Optical tweezers are scientific instruments used to control and displace micro-particles. They were invented in the 70s and were the inspirational idea that led to optical cooling and trapping. This technique exploits the restoring forces induced on small particles by a tightly focused light. Optical tweezers have become widespread devices to manipulate neutral particles of sizes ranging from a few hundred nanometres to a few micrometres but have since now been of limited use for the optical trapping of dielectric particles smaller than 100 nanometres because of the strong light intensity required on this scale. Moreover they are bulky and complex optical systems with only a weak, if any, selectivity of the trapped particle with respect to its, shape, size or refractive index.
We have presented the first experimental demonstration of an integrated hollow optical cavity, which selectively traps sub-wavelength particles with unprecedented low optical powers of less than 100 microwatts within photonic crystal structures. The optical traps are then implemented in a microfluidic chip. The trapping is achieved by light, pumped through a guide consisting of a missing line of holes that provides light throughout the structure to the optical cavity where the sharp field variation creates the binding forces.
The perturbation of the cavity mode by the trapped particle generates a noticeable resonance wavelength shift. This change in wavelength is associated with the Brownian motion of the particle within the resonant trap. Two trapping regimes have been discovered. While one of these regimes is comparable in nature to classical optical tweezers, the second is very unique as the optical field generating the restoring force is only present when the particle is moving toward the outside of the trap and vanishes when the particle is well located within the centre of the trap.
Future prospects include the use of microfluidic integrated hollow photonic crystal cavities for single particle sorting and trapping in a well controlled orientation, analysis, advanced spectroscopy, the investigation and manipulation of biological microorganisms such as small bacteria, cell organelles and viruses. These results constitute a first step towards the manipulation of single particles of the size of a virus on a CMOS-compatible chip using ultralow optical powers. This could potentially lead to new generations of portable Lab-on-a-Chip devices for Point-of-Care diagnosis. 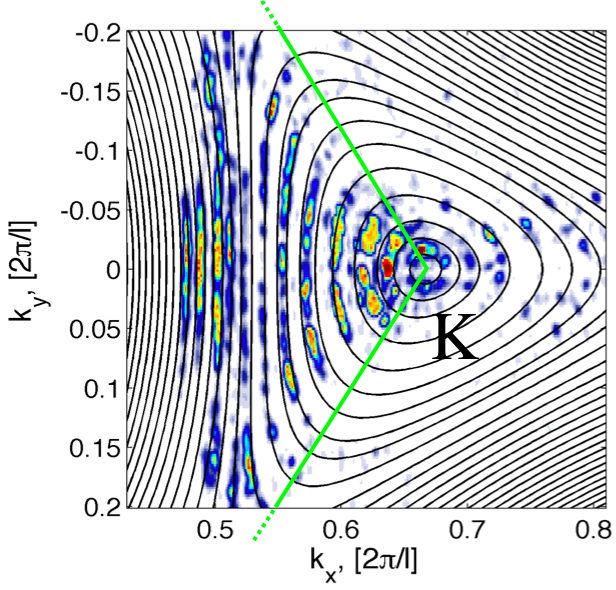 The standard characterization techniques consist in the measurement of the optical response or light emission from the PhC structures. Although this gives access to a large number of important information, it is a type of a black box approach. It does not directly investigate light propagation inside the PhC and fundamental quantities such as dispersion curve or equi-frequency surfaces (EFS) are only inferred after data analysis. Imaging directly the Bloch mode in real and reciprocal space is achievable with old-fashioned classical optics. The principle is to image with a high numerical aperture microscope objective the out of plane scattered light from the PhC in a standard end-fire experiment. This already provides high-resolution optical images, but more interesting, imaging the back focal plane of the collecting lens (the Fourier plane) gives access to far field or k-space images. In this plane, every point is uniquely related to a direction of emission, thanks to geometrical optics, which is also uniquely related to a unique in-plane wave vector of the PhC Bloch mode thanks to in-plane wave vector conservation law. The figure shows an example of 2D Equi frequency surfaces below the light measured with Fourier imaging and a probe grating.
This experimental tool provides very interesting information for the investigation of light propagation in photonic crystal structures, high-Q cavities or devices characterization and fabrication issues. 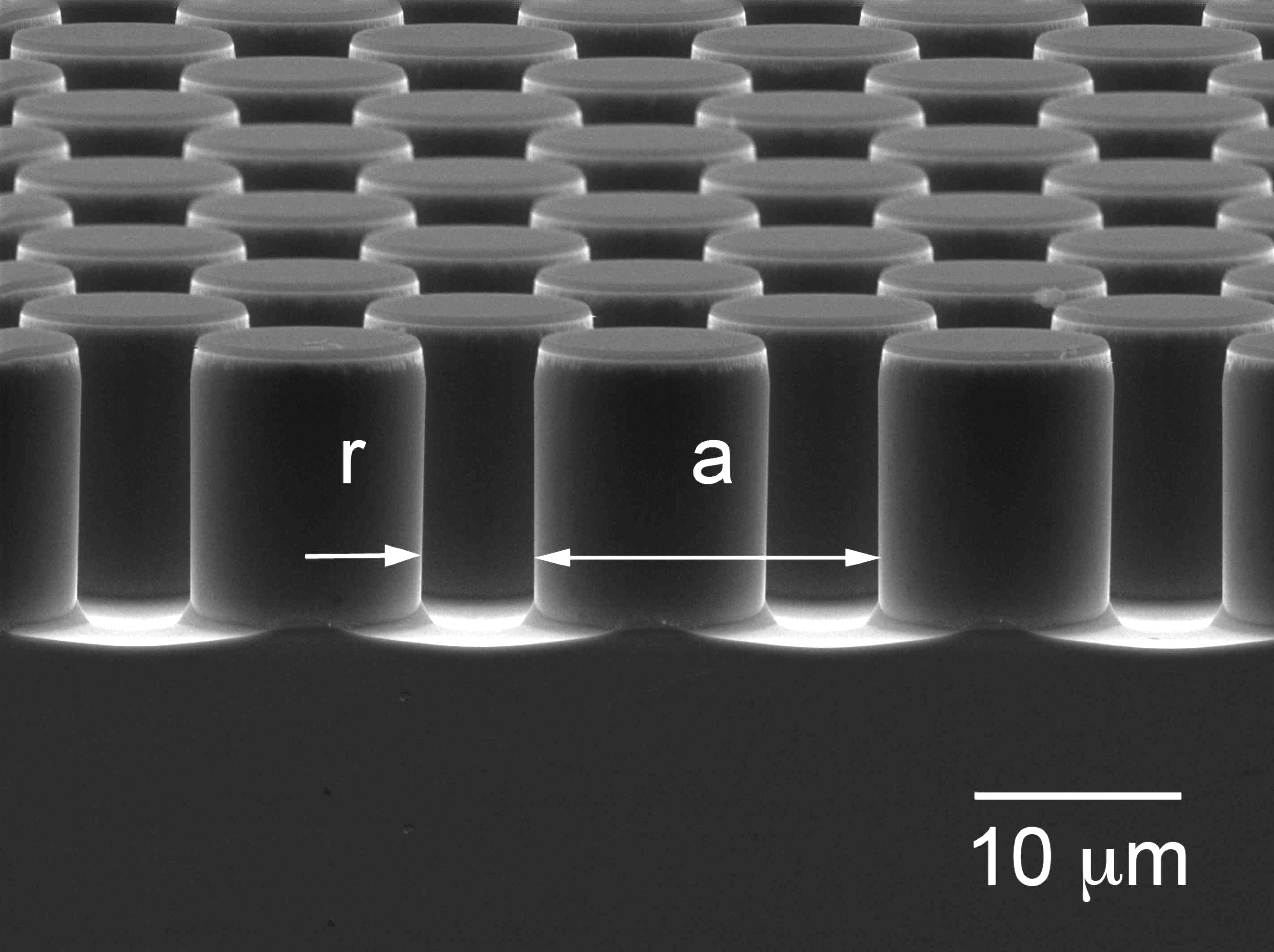 We are presently working on pillar photonic crystal inserted in double plasmons structures for in-plane or vertical emission.