Using conditional gene targeting strategies we have established an essential role for Notch1 in specifying the T cell lineage. More recently, we explored the ability of the Notch ligands Delta1 (DL1) and Delta4 (DL4) to induce T cell lineage commitment and/or maturation in vitro and in vivo from BM progenitors. Collectively our results establish a hierarchy of Notch:Delta interactions in which Notch1:DL4 exhibits the greatest capacity to induce and support T cell development suggesting that DL4 might be the physiological ligand within the thymus. This hypothesis was confirmed in vivo by generating mice in which DL4 could be specifically inactivated in thymic epithelial cells (TECs). Loss of DL4 in TECs led to a complete block in T cell development coupled with the ectopic appearance of immature B cells in the thymus. These immature B cells were phenotypically indistinguishable from those developing in the thymus of conditional Notch1 mutant mice. Collectively, our results demonstrate that DL4 is the essential and non-redundant Notch1 ligand responsible for T cell lineage commitment within the thymus (Figure1).

Another aspect of our work focuses on the role of Notch in T cell leukemia. Aberrant Notch1 signaling within the hematopoietic system results in the development of acute lymphoblastic T cell leukemia in mice and humans. Thus Notch1 functions as oncogene in the hematopoietic system. We are currently investigating the molecular mechanisms by which uncontrolled Notch1 signaling exerts its oncogenic functions. 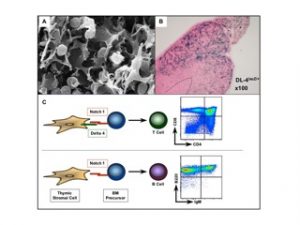 Figure 1: Cross talk between thymic epithelia cells expressing Delta 4 and uncommitted Notch1 expressing bone marrow progenitors is essential to specify T cells in the thymus. A. EM picture from the thymus showing the close interaction between immature thymocytes and thymic epithelial cells (Picture: Willem van Ewjik). B. LacZ staining on thymic sections derived from Delta 4 lacZ knock-in mice. The Delta 4 driven lacZ expression is preferentially confined to the cortex of the thymus (blue staining). C. Schematic illustration of T cell fate specification. Delta 4 mediated Notch1 signaling is essential for the generation of T cells. In absence of Delta-like 4 incoming BM progenitors adopt a B cell fate by default. Flurometric analysis of thymocytes derived from wild type (upper graph) and mice in which Delta-like 4 was specifically inactivated within thymic epithelial cells (lower graph). Total thymocytes were either stained with anti-CD4 and anti-CD8 antibodies (specific for T cells) or with anti-B220 and anti-IgM antibodies (specific for B cells).

In contrast to the previously established role of Notch1 as an oncogene and lineage specifier in the hematopoietic system, we unexpectedly identified novel roles for Notch signaling in the skin. Inducible ablation of Notch1 in the skin results in hair loss and epidermal hyperplasia within four weeks of deletion. By one year the same mice develop basal cell carcinoma-like tumors suggesting that Notch1 functions as tumor suppressor in the skin. Since the skin expresses multiple Notch receptors we aimed to completely abrogate Notch signaling in the skin to investigate whether these mice now develop skin tumors faster, or whether the tumor type changes. Skin specific loss of Notch signaling in the embryo results in skin barrier defects accompanied by a B-lymphoproliferative disease. Surprisingly, postnatal epidermis-specific inactivation of Notch signaling induces massive inflammation resulting in the development of a severe form of atopic dermatitis (AD, also known as eczema) in mice. Likewise, patients suffering from AD, but not psoriasis or lichen planus (two other common skin disorders), have a marked reduction of Notch receptor expression in the skin. Loss of Notch in keratinocytes induces the production of thymic stromal lymphopoietin (TSLP), a cytokine deeply implicated in the pathogenesis of AD. The AD-like associated inflammation is accompanied by a myeloproliferative disorder (MPD) characterized by an increase in immature myeloid populations in the bone marrow and spleen. Transplantation studies revealed that the MPD is cell non-autonomous and caused by dramatic microenvironmental alterations. Genetic studies demonstrated that G-CSF mediates the MPD as well as changes in the bone marrow microenvironment leading to osteopenia (Figure 2).

Our studies demonstrated a critical role for Notch in repressing TSLP production in keratinocytes thereby maintaining integrity of the skin and the hematopoietic system. 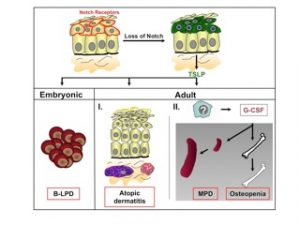 Figure 2: Model for the role of Notch signaling in adult skin and how its loss results in skin and hematological disorders. Notch receptors are expressed in the suprabasal cell layer of the skin. Skin specific loss of Notch signaling leads to pronounced secretion of TSLP by epithelial cells. High TSLP serum levels in the embryo or neonates cause a cell non-autonomous B-lymphoproliferative disease (B-LPD). In contrast, the presence of TSLP in adult mice results in the recruitment of mast cells and eosinophiles within the dermis of Notch mutant mice, thereby contributing to massive inflammation and the development of an atopic dermatitis-like disease. At very high TSLP serum levels, ak currently unknown cell type produces G-CSF, causing the cell non-autonomous development of a myeloproliferative disorder (MPD) and osteopenia.

Notch signaling is essential for the maintenance of intestinal progenitor cells


Aberrant Wtn signaling in the intestine is one of the most frequent events during the development of colorectal cancer. The inhibitory interaction between Notch and wnt signaling in our skin studies prompted us to investigate Notch function in the gastrointestinal tract. If Notch signaling plays a similar role in the gut as in the skin, then mice in which Notch signaling is inhibited are expected to develop tumors as a consequence of increased b-catenin mediated wnt signaling. Surprisingly, conditional inactivation of the CSL (which mediates Notch signaling of all receptors) within the crypt compartment results in the complete loss of transient amplifying cells followed by their conversion into mucus secreting goblet cells. Thus in the intestine Notch functions as progenitor gatekeeper, and seems to cooperate with wnt signaling in order to maintain the undifferentiated proliferative crypt compartment.

More recently we assessed the crucial role of individual Notch receptors and the mechanism by which they maintain intestinal crypt progenitor cells by using a series of inducible gut-specific Notch mutant mice. We found that Notch1 and Notch2 receptors function redundantly in the gut, as only simultaneous loss of both receptors results in complete conversion of proliferating crypt progenitors into post-mitotic goblet cells. This conversion correlates with the loss of Hes1 expression and derepression of the cyclin dependent kinase (CDK) inhibitors p27Kip1 and p57Kip2. We also found that the Notch effector Hes1 in wild-type crypt progenitor cells occupies the promoter of both CDK inhibitor genes. Thus, our results indicate that Notch-mediated Hes1 expression contributes to the maintenance of the proliferative crypt compartment of the small intestine by transcriptionally repressing two CDK inhibitors.

Notch signaling is required for exocrine regeneration after acute pancreatitis. (2008)

Is there molecular cross talk between Notch and the pre-TCR during thymocyte development?

Roeder I and Radtke F.