Curiosity is an emotion in human and animals, which motivates them to explore their environment for the purpose of learning, investigation and gaining information. It can be replicated in artificial intelligent systems so that artificial agents such as robots or specific programs can show the similar behaviour when they observe a phenomenon that is new and unexpected to them. The main objective of this project is to elaborate an artificial curiosity module in space exploration robots in extra orbital mission which can select the scientifically relevant images among the vast image datasets autonomously collected using several high- definition sensors, discarding the rest of images and sending the selected  images back to earth. Ona possible approach to curiosity replication in artificial agents is to study human subjects and their physiological markers, and  once such markers recognized, to incorporate a model in an artificial intelligence system generating similar behaviours. One of the physiological signals known to change during surprise and curiosity is the brain electrical activity as extracted by sensors such as electroencephalogram. In this project, this signal and its components such as P300 and Gamma band responses will be analyzed to study whether the cyriosity which is provoked in subjects by showing them different visual stimuli can be detected. To this end, different signal acqusition paradigms will be studied and implemented. Moreover, innovative approaches are proposed for selection of scientifically relevant images, and identification of regions of interest in images that are selected for transmission to earth. 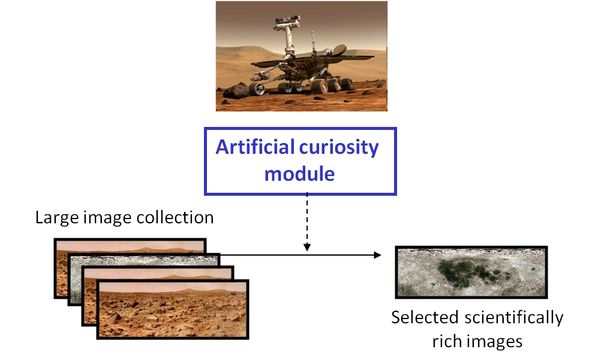