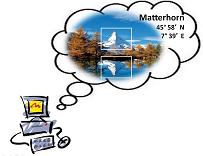 Replica detection aims at discovering replicas, or copies, of  originals. By replica, we refer not only to a bit exact copy of a given original, but also to modified versions of the original after minor manipulations, as long as these manipulations do not change its perceptual content. In the particular cases of images, replicas could include all variants of the original image obtained after common image processing manipulations such as compression, blurring, contrast adjustment, change in color space, etc. In the case of objects replica detection, the modification caused by view point  or other contextual changes.

Systems for object replica detection can be used for a wide variety of tasks, including:

In this section, we present an efficient solution for 3D object duplicate detection in static images. The goal is to detect the presence of a target object and to predict its bounding box, based on a set of images containing that object. A small number of training images, typically one to four, containing different views of the target object, are sufficient enough to achieve good performance.

The block diagram of the developed object duplicate detection algorithm is depicted in the following figure: 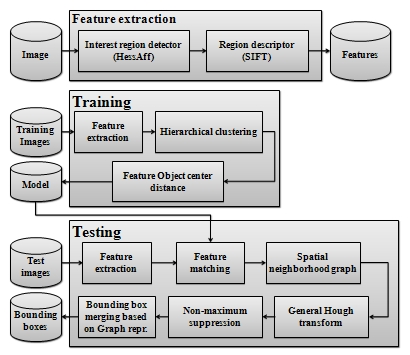 During the training phase, a set of images of the target object (from different views, and with eventual deformations) is processed. First, features are extracted from the training images. To resolve the localization problem efficiently, we use accurate sparse features detector and descriptor. Hessian affine detector and SIFT affine invariant image descriptors are extracted. Hierarchical clustering is then applied in the feature space to increase the efficiency of the matching process.

In the testing phase, we retrieve images according to a query by applying two-direction nearest neighbor feature matching is applied. K-nearest neighbors in the query image are calculated and combined into the spatial neighborhood graph, considering the spatial distance of the features and similarity with the features in the model image. This graph contains spatial information from the potentially matching objects, hence making our algorithm more robust. The position is considered by applying General Hough Transform on the nodes of the graph.  This method results in several bounding boxes with overlapping and duplicated bounding boxes. These are then rejected by applying Non-maximum suppression algorithm.

Results can be seen in the following figure: