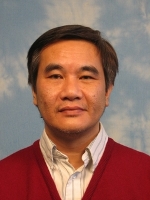 Dr. Thien M. HA received his BS and PhD degrees, both in electrical engineering, from the Ecole Polytechnique Fédéral de Lausanne (EPFL), Switzerland, in 1985 and 1989, respectively. From 1989 to 1990, he was a visiting researcher at the Department of Electrical and Computer Engineering, University of California, Santa Barbara, U.S.A. In 1990, he joined the University of Berne, Switzerland, where he worked in the field of document image recognition and decision theory. In 1997, he founded HA MINH PATTERN RECOGNITION and subsequently won an international bid for an OCR project of the Swiss Post. Since then, he manages and develops his company while working occasionally for other companies and institutions on a part-time basis (FingerPIN AG, Zuerich, as Biometrics Software Manager in 1999, Ecole Polytechnique Fédérale de Lausanne and University of Berne as a senior researcher in 2007). In 1997, Dr. Ha was included in Who’s Who in the World.

Dr. Ha has participated in many industrial projects involving computer vision and pattern recognition. He has also provided technology assessment for investment banks. He is author or co-author of some 40 papers, including one tutorial chapter on image processing for the Handbook of Character Recognition and Document Image Analysis. He is a member of the IEEE Computer Society and EURASIP (European Association for Signal Processing). Dr. Ha regularly serves on the program committee of the International Workshop on Structural and Statistical Pattern Recognition, as well as other related conferences. He is a regular peer-reviewer of many international journals, including Signal Processing, International Journal of Pattern Recognition and Artificial Intelligence, IEEE Transactions on Pattern Analysis and Machine Intelligence, IEEE Transactions on Systems, Man, and Cybernetics, IEEE Transactions on Image Processing, Pattern Recognition Letters, Image and Vision Computing, Optical Engineering, and International Journal of Imaging Systems and Technology.