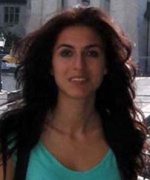 Marija Uscumlic was born in Belgrade, Serbia, on December 6th, 1981.

She received the Dipl. Ing. Degree, from the University of Belgrade, Faculty of Electrical Engineering, in 2005. She spent four months on a student internship in Siemens, Belgrade working on telecommunication networks.

After graduation she joined the Group for Image Processing, Telemedicine and Multimedia (IPTM) at the Faculty of Electrical Engineering in Belgrade. As a research assistant in the IPTM Group she has participated in several projects: COST Action 292 – “Semantic multimodal analysis of digital media”, “Automated detection of microcalcifications in digitized mammograms targeted to an early detection of a breast cancer” and “ECG signals analysis and classification and system for remote control of automated digital microscope (ADM) for telemedicine purposes”.

From January until October 2008, she worked in the Multimedia Signal Processing Group at EPFL. She was involved in IM2.MCA (Multimodal Content Abstraction) project, working on the Tagged media-aware multimodal content annotation.