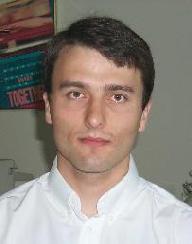 Dr. Raphaël Grosbois was born in Meaux, France, on June 20th, 1975. He received the master degree in Electronic, Electrotechnique and Automatic (Image processing option) in 1997 from the University of Paris-Sud (Paris XI-Orsay) and, as a student of the Ecole Normale Superieure of Cachan, he passed the French Aggregation of Physics (Applied physics option) in June 1998. He joined the Signal Processing Laboratory of EPFL (Swiss Federal Institute of Technology) in September 1998 where he did his French national service (cooperation) from October 1998 to January 2000. He worked towards a Ph.D. degree at LTS on “Image processing and manipulation in the compressed domain”.

Authentication and access control in the JPEG 2000 compressed domain

Watermarking in the JPEG 2000 domain