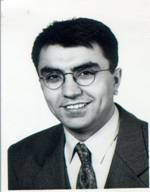 Dr. Emrullah Durucan graduated from the University of Bielefeld, Germany. He also studied at the Universities of Lyon, France and Birmingham, England. He received his M.Sc. degree on particle physics from the Max-Planck-Institute (MPIK) in Heidelberg. He also worked at CERN, Switzerland and FERMILAB, USA. In September 1997 he joined the Signal Processing Lab where he pursued research on illumination-invariant video-surveillance in general and change detection in particular. He obtained his Ph.D. degree in Dec. 2001, and joined Daimler-Benz in Germany. His main development is the definition of powerful change detection algorithms based on the concept of linear independence.

Robust and Illumination Invariant Change Detection Based on Linaer Dependance