In our lab have laid a technological foundation by developing time- or frequency resolved femtosecond (fs) vibrational sum frequency scattering (SFS), a combination of light scattering and nonlinear sum frequency generation spectroscopy in aqueous solutions. In an SFS experiment an infrared photon, at resonance with vibrational modes of interest, combines with a non-resonant visible photon into a sum frequency (SF) photon. SFS photons can only be coherently generated when there is no spatial centrosymmetry.

Thus, thanks to nature’s symmetry selection rules with respect to nonlinear optical processes, SFS allows to measure the molecular surface structure, morphology and chirality of nano- and microscopic objects in solution by recording the vibrational spectrum of the ~3 molecule thick interfacial layer around the objects where the centrosymmetry of isotropic liquids is broken.

We developed a series of theories and tools to understand the fundamentals of the nonlinear scattering process:

A variety of systems, such as polymer particles in a solid matrix [J. Phys. Chem. B, (2013),117, 8906], particles in solution, oil droplets in water, water droplets, a micro-jet [J. Chem. Phys., (2014), 141, 18C524-1-6] and liposomes in aqueous solution were characterized, often with surprising outcomes. Nanoscale objects simply do not behave in the same way as model planar interfaces.

More recently we have developed a new instrumental approach for fs-second harmonic scattering (SHS, an elastic non-resonant form of SFS, employing two identical frequencies, and addressing the electronic states of a molecule rather than the vibrational levels, see above figure). This has led to instrumentation with an increased throughput. The enhancement enables the non-resonant probing of water at nanoscopic aqueous interfaces on millisecond time scales. Compared to the instruments used in the pioneering work by KB Eisenthal, ECY Yan and HF Wang in the 1990’s the device allows for an enhanced efficiency of three orders of magnitude (effectively achieved by optimizing the trade-off between energy transfer and SH generation efficiency) and enables the detection of the weak non-resonant optical response of interfacial water. Also, considering for the first time the angular distribution of scattered light rather than probing in the phase matched direction we are able to extract molecular properties such as surface chirality and interfacial molecular tilt angles. Although it was already recognized in the 1960’s that the SH intensity relates to the interfacial electric potential, by considering the full angle resolved scattering process and incorporating light emitted from the interfacial electric double layer we have been able to calculate unique values of the surface potential. In contrast to other methods (e.g. electrokinetic mobility measurements), no mean-field assumptions about the interfacial structure are needed. The same theory, when applied to extended planar surfaces shows the importance of interference effects in SHG and SFG spectroscopy. 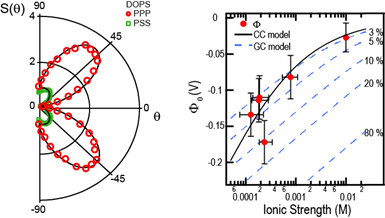 Our high efficiency nonlinear light scattering method can be directly transferred to microscopy, allowing for high-throughput wide field multiphoton microscopy. Our approach vastly reduces photodamage effects in living systems. Single living mammalian neurons can now be imaged on the sub-cellular level with sub-second acquisition times, and the translational and rotational diffusing of particles can be measured inside living cells with a single laser shot (5 microseconds). More on this here.